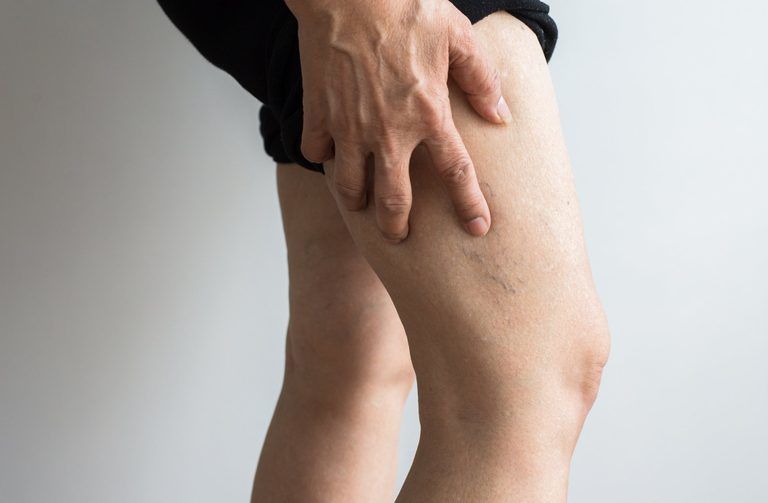 6 Things You Can Do to Prevent DVT, A Deadly Blood Clot In Your Leg

What you need to know about the signs and symptoms of Deep Vein Thrombosis-a potentially life-threatening blood clot.

When she was 42, Tina Theobald suddenly developed a charley horse that wouldn’t let up. She recently had started jogging and thought nothing of the sore calf muscle. She iced it and hobbled through a short trip to Mexico as her leg swelled. When she saw her doctor upon her return, she was diagnosed with-and immediately hospitalized for-a large blood clot in her leg-a condition known as deep vein thrombosis (DVT). Two days later, Theobald struggled to breathe and had chest pain so excruciating, she needed morphine. A portion of the clot had broken off and was blocking the blood supply to part of her lung, a life-threatening condition called pulmonary embolism.

Theobald always thought blood clots affected older people-and it’s true that their risk is far higher-but she quickly discovered that young and middle-aged people are vulnerable, too. A number of risk factors play a role, including certain medications, pregnancy, immobility that allows blood to pool like prolonged sitting during a flight, surgery or trauma (such as a car accident) that can injure veins, and conditions that increase blood clotting, such as cancer and auto­immune disorders.

As many as 45,000 Canadians and 900,000 people in the United States are affected by DVT. Clots are most common in leg veins, where they can cause pain, swelling, and redness. Although blood clots can occur at any age, the risk increases with age; after 40, the risk almost doubles every 10 years. Within one month of diagnosis, 10 to 30 percent of people will die, according to the Centers for Disease Control and Prevention (CDC).

Signs and symptoms of DVT

A blood clot is a medical emergency because of the possibility of a pulmonary embolism. If you experience any of the DVT symptoms below, seek medical aid right away, especially if you’ve been exposed to the Covid-19.

Signs of DVT in a leg:

“Symptoms can be vague, such as pain or feeling like you just can’t get enough air,” says Bengt Zöller, an associate professor of internal medicine at Lund University in Sweden. Although it’s key to remember the signs of DVT, prevention is even more crucial, says Nigel Key, an adult hematologist specializing in non-malignant hematologic disorders, particularly those affecting blood coagulation, at the University of North Carolina School of Medicine. “Because DVTs and pulmonary embolisms can be difficult to recognize, we need to emphasize prevention,” says Key.

Keep these measures in mind to help you avoid life-threatening clotting.

How to prevent or avoid DVT in legs

Review your medications for any blood clot side effects

A few months prior to her DVT, Theobald had been prescribed birth control pills to regulate her period. All estrogen-containing medication (as well as the vaginal device NuvaRing and birth control pills containing drospirenone) may increase clot risk, as does pregnancy, with risk returning to normal about 12 weeks after delivery.

If your doctor is worried about your clotting risk, they may recommend non-hormonal contraception such as a barrier method or a copper IUD. The American College of Obstetricians and Gynecologists urges physicians to consider prescribing a patch or gel rather than a pill for postmenopausal women on hormone replacement therapy, since delivering hormones through the skin doesn’t seem to affect clotting risk.

Research, including a study published in 2016 in BMJ, shows that testosterone treatment raises the risk for DVT in men. That’s why the Food and Drug Administration requires prescription testosterone products to carry a warning about the risk. Research, including a 2107 study published in the BMJ, shows that prednisone and other steroids, especially at high doses, also increase DVT risk in both men and women.

Know if you have a family history of DVT

As the number of your close relatives who’ve had a clot rises, so does your own DVT risk, found a study published in 2016 in PLoS One. “If you have a strong family history, your doctor may think twice about prescribing hormones or may give a longer course of anticlotting drugs after surgery,” says Dr. Zöller.

Decrease pressure in the veins through weight loss

Obesity can more than double DVT risk, especially in women over five foot six and men six feet or taller, according to a 2017 study published in Circulation: Genomic and Precision Medicine. “Tall people have to pump blood farther against the force of gravity, which may reduce flow in the legs and raise the risk of clotting,” says Sigrid Brækkan, PhD, a researcher and professor in the department of clinical medicine at the Arctic University of Norway. Theobald, who is five foot seven, weighed near her heaviest, at 190 pounds, when her clot occurred.

Walking, or raising and lowering your heels while sitting, engages your calf muscles, squeezing veins and propelling blood upward, which helps prevent DVT. Immobility is why long flights are a risk. Get up once every few hours and raise and lower your heels or rotate your ankles when seated. If you’re at high risk, ask your doctor about wearing compression stockings or taking preventive blood-thinning medication for flights or car trips of more than four hours, suggests the CDC.

In a study in the Journal of Nutrition, people who took fish oil capsules and ate fish three or more times a week had a 48 percent lower chance of developing DVT than those who ate fish less often and didn’t supplement with fish oil.

Be proactive about DVT prevention during a hospitalization

Most hospital patients are at risk of DVT. The risk is 10 to 20 percent among general medical patients (general anesthesia temporarily widens veins, which can allow blood to pool and clot) and 40 to 80 percent in those who’ve had hip surgery, knee surgery, or any major trauma-this can damage veins and slow blood flow, increasing your risk.

If you have a hospital stay coming up, make sure doctors know about your medications and any DVT risks, such as a history of DVT in your family. The hospital staff will encourage you to move around, and your doctor may recommend compression stockings or anti-clotting drugs. Also, follow medical advice before and after your discharge. Missed doses of preventive drugs are to blame for many clots.

Theobald, for one, is diligent about taking anti-clotting meds because she knows that DVTs can return with a vengeance. Five months after her initial 13-day hospital stay, doctors weaned her off the blood thinner warfarin, but a new clot formed months later, enlarging her leg to almost the size of her waist. The resulting 10-day hospital stint brought new tortures, including shots of clot-busting drugs into the affected thigh.

Now she’s committed to taking warfarin-or whatever easier treatment comes along-for the rest of her life. And she wears compression stockings when sitting for long periods. But that’s not to say she leads a sedentary life. Since her DVT scare, she’s begun competing in triathlons.