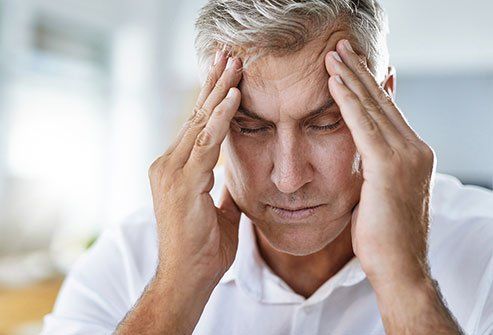 Migraine with aura (also called classic migraine) is repeated episodes of headache that occur during or after sensory disturbances (aura or migraine aura).

These disturbances may include symptoms such as flashes of light, blind spots, and other vision changes or tingling over the hand or face. Migraine aura is not in itself dangerous; however, the symptoms of migraine aura can sometimes look and feel like other serious conditions such as a stroke. It is advisable to consult a doctor to rule out anything serious. Triggers and treatment of migraine with aura and migraine without aura are usually the same.

Migraine is a type of headache characterized by intense throbbing pain in the head or behind the eyes. Throbbing pain or pulsing sensation usually begins on one side of the head, in the forehead, or around the eyes. Headache is aggravated by sudden movement, physical activity, loud noise, or bright light. Migraine may occur once or twice a month or every day (chronic) and is accompanied by symptoms such as nausea, vomiting, giddiness, or sensitivity to light and sound. Migraine pain normally lasts from 4 hours to 3 days and could be so severe that it may interfere with routine activities. The triggers, site of headache, severity, associated symptoms duration, and frequency of migraine episodes can vary from person to person. The symptoms of migraine aura also can vary from person to person. Migraines have a strong genetic predisposition and are usually more common in women than in men.

What is migraine aura?

Migraine aura is a series of sensory disturbances that often occur shortly before a migraine attack or may sometimes occur during or after the migraine attack.

Migraine auras are reversible symptoms of the nervous system. They occur in the form of visual and physical disturbances or sensations. These disturbances range from seeing bright dots, sparks, and patterns to muscle weakness, tingling on one side of the body, or inability to speak clearly and usually lasts for about 20-60 minutes.

Migraine aura does not occur with every migraine attack, and it may not affect every person. Sometimes, aura may occur without a headache. Although migraine pain does not occur, the aura symptoms can still be disruptive to daily activities.

They may be a result of certain chemical imbalances in the brain that occur during a migraine attack.

What are the signs and symptoms of migraine aura?

Those who have migraine aura may experience a range of symptoms including:

Visual disturbances such as seeing flashes of light, bright spots, sparkles, or stars
Temporary vision loss or changes in vision
Blind spots in the field of eyesight
Tunnel vision
Zigzag lines in vision
Dizziness
Vertigo (a feeling of spinning)
Weakness or numbness in the face
Muscle weakness or tingling on one side of the body
Prickly or burning sensations in an arm or leg
Uncontrollable jerking or other movements
Difficulty in speaking
Slurred speech
Unable to form right words
Confusion and difficulty in understanding
Depressed, irritable, and restless
Ringing in the ears, hearing noises, or music

Several brain chemicals play a role in causing migraines. A migraine with aura can be triggered by the same things that can trigger migraine attacks without aura. These include:

What is the treatment of a migraine and migraine aura?

Treatments for a migraine with aura and migraine without aura usually involve the same medications and self-care measures. They include:

Placing a cold compression on the forehead or the back of the neck
Moving into a dark quiet room and resting
Reducing emotional triggers such as stress, anxiety, and depression
Reducing physical triggers such as fatigue
Medications for both prevention and relief of symptoms

Medications for relieving symptoms that reduce the severity of a migraine attack include: