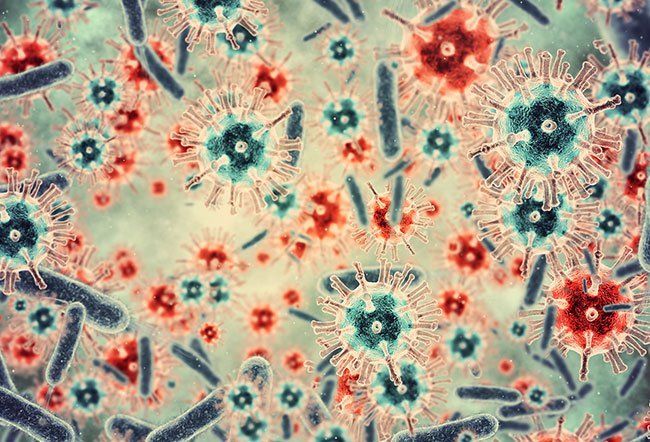 Viruses are germs that can cause diseases in humans, plants, and animals.

They have rudimentary genetic material, only a protein shell and a strand of RNA or DNA, depending on the virus type. They cannot reproduce on their own, but they may need a host cell for multiplying (such as the human body). Viruses are responsible for causing many diseases, including:

Germs or pathogens, such as viruses, bacteria, fungi, and parasites, are microscopic organisms that can cause illness and infections in people with weak immunity.

The most common types are:

How does a virus infect a human body?

A virus usually infects healthy cells in the body, uses them to reproduce, and kills them when it is done. Viruses are tiny packages of DNA or RNA (genetic material) that travel in a protein shell.

They have a protein coat that confuses the body’s healthy cells.
Once the virus is inside the host cell, the virus can release its genetic information and make copies of its genetic material.
After the virus reproduces in the cell, it breaks free, destroying the host cell in the process.
They are hard for the immune system to identify and target.
However, the body eventually learns to tell the difference between viruses and healthy cells. When it does, the immune system creates antibodies. These little proteins mark the virus. Antibodies lead immune-system agents, such as white blood cells, to the virus so that the defense system can wipe them out along with the affected cells.

The symptoms of viral infection may include:

Fever: Infections trigger an increase in body temperature. It is a strategy of the immune system to kill viruses. Some germs have a hard time living in high temperatures, so fever makes the body a difficult place for a virus to survive.
Runny nose: The body produces a lot of mucus to trap the germs and flush them out. A runny nose is a sign that the immune system is working hard to push back against an infection.
Coughing: If the cells in the airway detect an invader, they can trigger a cough. Forcibly coughing removes dust, bacteria, and viruses from the throat and lungs. Coughing also helps remove excess mucous from the nose and throat.
Sneezing: Just like coughing, sneezing is a reflex. It’s a powerful immune response that kicks germs out of the nose.

How is the viral infection treated?

The primary way to prevent viral infections is by vaccination.
The Centers for Disease Control and Prevention recommends immunization for 17 preventable diseases in babies, children, adolescents, and adults.
The vaccine often contains a weakened or a killed virus, which can cause infection, but not the illness. The vaccines cause the body to develop protective proteins called antibodies, which help fight the disease. Getting a vaccine reduces the chances of getting sick. The more people get vaccinated, the lesser are the chances of active infections or virus shedding. This causes fewer infections in the community. This is called herd immunity.

The best way to fight viral infection is to maintain a healthy lifestyle and boost the immune system. Fortunately, the immune system can fight off most viral infections within a few days.
Diet plays a key role in maintaining overall health. Enjoying a wide variety of vegetables, fruits, and whole grains as well as drinking plenty of water contribute to a well-functioning immune system.
Regular exercise and getting adequate sleep are also ways to improve the immune system. Refraining from smoking and limiting alcohol consumption help preserve the body’s ability to fight germs.
Also, washing hands properly by scrubbing the back and front of hands as well as in between fingers and under fingernails with soap and warm water for at least 20 seconds and cooking meats thoroughly are simple steps to avoid infection and boosting immunity.