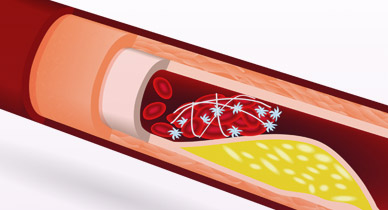 Blood Clots May Be an Early Indicator of Undiagnosed Cancer

Researchers say clots in abdominal veins could alert doctors to cancer that hasn’t been diagnosed yet.

Researchers say blood clots in an abdominal vein may be a possible indicator of undiagnosed cancer.

Their study was published today in Blood, the journal of the American Society of Hematology (ASH).

These clots, known as splanchnic venous thrombosis (SVT), occur in veins that carry blood through the liver and other abdominal organs.

SVT is rare and usually only forms as the result of another complication. Therefore, its association with cancer has been less clear than the association between cancer and clots in the legs (deep vein thrombosis, or DVT) or lungs (pulmonary embolism, or PE).

“We found it plausible that a similar association would exist for splanchnic venous thrombosis,” Dr. Kirstine Søgaard, lead author of the study, said, “but this had not previously been shown.”

To zero in on SVT’s correlation to cancer in particular, researchers in Denmark analyzed the medical discharge diagnoses of 1,191 Danish patients who had all been diagnosed with abdominal clots.

After tracking the patients for a median of 1.6 years, the research team compared the risk of the SVT patients’ subsequent cancer diagnosis with the expected risk of the general population.

Of the SVT patients tracked, 183 of the 1,191 were diagnosed with cancer. Half of these patients received their diagnosis within three months of their initial SVT diagnosis.

“The blood clots do not cause the cancer. The cancer comes first, but we showed that SVT may be the first manifestation of cancer,” said Søgaard, a Ph.D. student at Aarhus University. “And that it also predicts a poorer outcome in cancer patients.”

Søgaard also noted that liver cancer, pancreatic cancer, and myeloproliferative neoplasm (or blood cancer) were the three most frequent cancers diagnosed after a discovery of SVT.

Survival Rates Not as High

Survival rates are also grimmer for those with a dual SVT and cancer diagnosis.

Although SVT is rare, the study brings to light questions about whether patients who are known to suffer from these blood clots should undergo advanced screenings for cancer.

Søgaard said the study is important for clinicians who are hoping to properly care for patients with these rare blood clots.

“We don’t know for sure how frequent this type of thrombosis is, but the few data that exist suggest that it is quite rare,” she said. “Our results are therefore most likely of interest to clinicians in gastroenterology and hematology.”