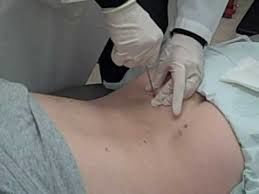 What is bone marrow?

The soft spongy tissue in the center of bones is the bone marrow. The bone marrow contains the different types of cells (stem cells) that give rise to the red cells, white blood cells, and platelets found in our blood. The marrow may also contain abnormal cells, proteins, or inflammatory reactions that are not normally present, such as cancer cells (for example, Hodgkin or non-Hodgkin lymphoma cells or leukemia cells) in some individuals. Since the production of red cells requires iron, the marrow is one of the places in the body that normally stores a supply of iron. When we are younger, our bone marrow contains very little fat. As we age, the percentage of fat in our marrow increases.

What is a bone marrow procedure (aspiration and/or biopsy)?

In general, internists, hematologists, oncologists, and transplant specialists are the doctors that usually perform bone marrow aspirates and/or biopsies.

Why are bone marrow biopsies or aspirations done?

Most bone marrow aspirations are performed to diagnose various conditions that affect the different types of blood cells. Abnormal blood counts can lead a doctor to suspect that there may be a problem in the bone marrow. Another frequent purpose of a bone marrow is to diagnose certain cancers or to determine the extent of a cancer (cancer staging) that is present within the bone marrow. Bone marrow procedures can also detect uncommon nonhematologic conditions, both cancerous and noncancerous, including abnormal proteins (such as in amyloidosis), inflammation (such as in sarcoidosis), and infection (such as in tuberculosis). This procedure can also be used to obtain marrow cells for transplantation.

Bone marrow biopsies remove a core of bone to allow physicians to evaluate the structure and cellularity of the tissue with a microscope. These biopsies may reveal abnormalities of bone structure and any associated abnormal cells, protein deposits, or inflammatory processes. A bone marrow aspirate is primarily a liquid sample that reveals the mixed cell population of cells within the marrow. In contrast to a bone marrow biopsy, a bone marrow aspirate does not show the relationship of the cells to each other or to the bone, or the cells' precise location in relation to the bone. The procedures are often performed together, with an aspirate obtained prior to a biopsy.

What bone is used to sample the bone marrow?

The most frequent site for obtaining bone marrow is the pelvic bone, known as the ilium (posterior iliac crest). A portion of this bone is readily accessible in most people from the lower back and is usually marked by shallow dimples on either side of the spine. Other sites include the front of the pelvic bone near the groin and the sternum (breastbone) at the front of the chest. However, the sternum is sampled only for aspiration and done in individuals older than 12 years of age. This site is considered to be "a last resort" because the sternum is thin and there is risk of penetrating the underlying soft tissues. The tibia (shinbone) is sampled only in infants younger than 1 year of age; it is not sampled in adults because it may not yield a sufficient sample of bone marrow cells.

How do physicians perform a bone marrow aspiration and/or biopsy?

Typically, only a local anesthetic is required to numb the skin and tissue down to the surface of the bone although some patients may require a sedative. A physician makes a small cut (less than ¼ inch) in the skin and then uses a hollow needle, whose center is filled by a removable metal rod (called a trocar), to penetrate through the dense outer shell of bone. This needle (the most popular is termed the Jamshidi needle) can be used for both aspiration of marrow liquid or for a needle biopsy core of solid material. Once inside the bone, the trocar is removed and a syringe is attached to the now hollow tube of the bone marrow needle. The bone marrow is withdrawn as a thick liquid by pulling back on the plunger of the syringe and collecting the liquid. This sample is known as the marrow aspirate. This part of the procedure only lasts a few seconds but is usually the most painful due to the sudden sense of a negative pressure inside the bone.

A biopsy can also then be obtained in addition to the marrow aspirate or when an aspirate cannot be obtained. The same needle is used but without the center portion in place. As the needle is partially rotated into the bone, it cuts a core that is trapped inside the needle. Once the needle is removed, this core can be extracted from the needle barrel. This core can then be prepared with fixatives and stains for examination under a microscope.

Since the skin cut for both bone marrow procedures is usually very small, no stitches are generally necessary and only a bandage is applied. Recovery from the procedures is usually rapid (about one day, although some patients may feel tenderness at the site for about a week). Any post-procedure bleeding should be addressed by your physician. Those patients who require IV sedation will require someone to bring them home and should remain fairly sedentary for about 24 hours.

The cost of a bone marrow aspiration and/or biopsy varies greatly; it depends on the location (hospital or doctor's office), insurance coverage, and the country. Consequently, the cost range is wide (from about several hundred dollars to several thousand dollars) and may or may not include additional testing of the sample.

What is done with the bone marrow sample?

The bone marrow core biopsy is first placed in a liquid that keeps the cells in their natural condition (fixative solution). The sample is then placed in a solution to soften the bone and is finally processed like other biopsies in the tissue study (histology) laboratory. The liquid portion of the bone marrow is spread on glass slides and stained to make the bone marrow smears. The slides are then examined under the microscope, usually by a specially qualified technician followed by a physician such as a hematologist or pathologist. The results of aspiration or bone marrow biopsy are examined for abnormal-appearing cells, a reduced or increased amount of normal bone marrow cells as compared to normal marrow values, and the presence or absence of cancer cells as well as other abnormal structures. Portions of either sample may be submitted to the microbiology laboratory for cultures or other studies to identify infections. Certain conditions may require other specialized studies such as genetic testing or cell marker studies.

What diseases are diagnosed by bone marrow examination?

A wide variety of conditions can be diagnosed by examination of the bone marrow. The following examples illustrate some of the most frequent conditions, but there are many more. The presence or absence of cancer in the bone marrow can determine what treatments are recommended to a patient with cancer known to be elsewhere in the body. Some cancers (leukemia, multiple myeloma, polycythemia, pancytopenia) arise from cells in the marrow, so this is where the biopsy must be taken to confirm the diagnosis. Other cancers, like lymphomas, can spread to the bones. A low blood-clotting element (platelet count) in the blood (thrombocytopenia) can be due to several causes. It is important to establish whether or not the cells that make the platelets (megakaryocytes) are still present in the marrow (idiopathic thrombocytopenic purpura [ITP]) or are gone (along with most other bone marrow cells as in aplastic anemia). Most cases of anemia (low red blood cells) can be diagnosed by simple blood tests. When these tests are negative, examining the marrow can reveal problems with the red blood cells that are uncommon causes of anemia (sideroblastic anemia, aplastic anemia). Persistent fevers can be caused by infections that reside in the marrow (atypical mycobacteria, brucellosis) and a sample of the marrow may provide the best source of culture material.

What are the risks or complications of a bone marrow procedure?

Different individuals feel the pain caused by injection of the local anesthetic and the remainder of the procedure to a variable extent. There may be dull soreness for a day or two. Significant complications are very unusual but can include bleeding and infection and prolonged pain. This procedure is only done by experienced physicians using special bone marrow needles. Bone marrow biopsies are done almost exclusively from pelvic bones. It is unsafe to perform a bone marrow biopsy on the sternum, so a special needle with a guard on it is used for sternal marrow aspirations to prevent the needle from going too deep. Some individuals may develop bleeding problems at the site or if an artery is cut.

Rare fatalities have been reported, usually during sternal marrow aspirations when the needle has penetrated the sternum and cut one of the arteries on the surface of the heart.

Some researchers use bone marrow aspirates in clinical trials to collect marrow cells that can be modified for experimental treatments for several different diseases.