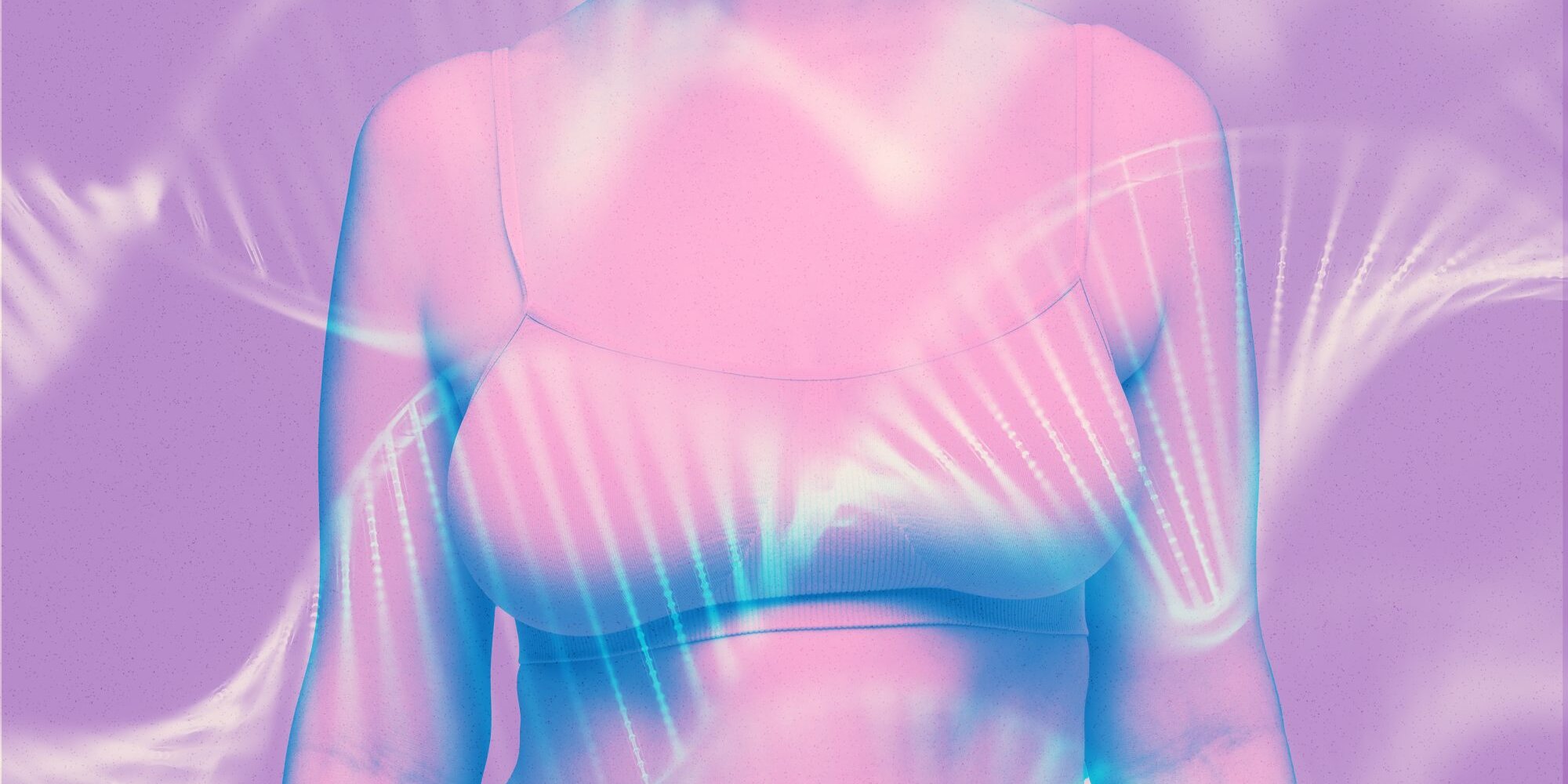 BRCA1 vs. BRCA2: What to Know About These Gene Mutations and Breast Cancer

Experts explain risk factors, how to get tested, and more.

Each year, millions of people are diagnosed with cancer, a disease in which cells begin to grow uncontrollably and spread to other parts of the body. Many of these cancers are hereditary, which means they're in part caused by a genetic predisposition that runs in a person's family. For example, according to the Centers for Disease Control and Prevention (CDC), 5-10% of breast and 10-15% of ovarian cancers occur due to hereditary risk factors.

While there are a number of genetic predispositions that can lead to cancer, one of the most well-known factors that increase people's risk for various cancers-most notably, breast cancer-is a BRCA1 or BRCA2 mutation. Not everyone with a BRCA1 or BRCA2 mutation will get cancer, but it's important to understand the associated risks and the preventative care options.

Here's what you need to know about BRCA1 and BRCA2, according to experts.

What does it mean to have a BRCA mutation?

According to Payal Shah, MD, a medical oncologist at Penn Medicine and assistant professor of medicine at the Hospital of the University of Pennsylvania, everyone has two copies of genes called BRCA1 and BRCA2, one copy inherited from each parent. BRCA1 and 2 are repair genes, so they help the body repair mistakes in DNA.

Karlena Lara-Otero, PhD, a genetic counselor at Stanford Health Care, says BRCA1 and 2 genes are specifically tumor suppressor genes that prevent cells from growing out of control, which is what leads to cancer. "When these genes work properly, they go to the site where cell damage occurs and repair it so cells can continue to function properly," Lara-Otero tells Health.

The BRCA mutation can cause many types of cancer, but it's most significantly associated with breast cancer. According to Lara-Otero, that's because the BRCA gene is responsible for repairing DNA in breast tissue.

A BRCA mutation occurs when someone's born with a copy of a BRCA gene that doesn't suppress tumor growth effectively. This can lead to an increased risk of various cancers, such as breast and ovarian cancer, melanoma, pancreatic cancer, and prostate cancer.

Anyone who inherits a pathogenic variant of a BRCA gene from one of their parents has a BRCA mutation. While anyone can have this mutation, some people are at a higher genetic risk. According to the National Cancer Institute, 2% of people of Ashkenazi Jewish descent carry the BRCA gene mutation.

What cancers can a BRCA mutation cause?

According to Mike Suguitan, MS, LCGC, a genetic counselor at Northwestern Medicine, tells Health that a person's specific risk for developing those cancers depends on which mutated gene they carry. While both BRCA1 and BRCA2 mutations increase the risk for breast, ovarian, prostate, and pancreatic cancers, there are other factors at play, including sex. The National Cancer Institute (NCI) states that men with these mutations are at higher risk for developing breast cancer (though their increased risk is lower than that of women), and they also have an increased risk of developing prostate cancer. Both men and women with these mutations have an increased risk of developing pancreatic cancer, though the risk is fairly low.

Dr. Rana says these mutation carriers have higher risks of other cancers as well, including melanoma, pancreatic cancer, and aggressive prostate cancers, though BRCA2 is also associated with more hormone-receptor-positive cancers than BRCA1. Hormone-receptor-positive breast cancer occurs when breast cancer cells have receptors for the hormones progesterone or estrogen.

Who should get tested for BRCA gene mutations, and how does it work?

If you're wondering whether you may have a BRCA mutation, the first step is to collect your family health history. If you have BRCA-related cancer in your family, you may be a candidate for testing. For example, Dr. Shah says a clinician may test people with relatives who had breast cancer at a young age. Currently, the U.S. Preventive Services Task Force recommends genetic testing to women with a personal or family history of breast, ovarian, fallopian tube, or peritoneal cancer (cancer in the tissue of the abdomen) or an ancestry associated with a BRCA1 or BRCA2 mutation.

As you collect your family health history, pay attention to certain details. "Make sure you have information on the types of cancers in your family, including the age of diagnosis, how the person is related to you, and whether they ever had any other genetic testing done for inherited cancers," says Dr. Rana.

It's also important to understand the limitations in your family history. For example, if your parent is an only child or your parent was adopted, Dr. Rana says that's not the same as having no family history of cancer.

Diagnosis with certain types of cancer may prompt genetic testing, too. Dr. Shah says high-grade serous ovarian cancer, for example, should be tested upon diagnosis. Any patient with triple-negative breast cancer should also be tested. "Diagnosis at a younger age or a somewhat younger age with a family history clues us in as well," she explains.

If your doctor refers you for genetic testing, you'll likely work with a genetic counselor. According to Lara-Otero, if your results show a genetic mutation, you'll visit the genetic counselor for a more in-depth conversation about the altered gene, the risks, and prevention strategies.

That said, it's up to you whether you get genetic testing. While some may feel empowered by the knowledge and the ability it gives them to be proactive, Tarah Ballinger, MD, an oncologist at Indiana University Health, tells Health that for others, increased surveillance of breast and other cancers can increase anxiety. Plus, making major medical decisions to prevent cancer can feel overwhelming for some people.

If you decide to move forward with genetic testing, you'll need to consider the cost, too. According to Dr. Rana, genetic testing is often covered by insurance when it's recommended by a doctor, whether you have Medicare, Medicaid, or private insurance. "You have to meet a certain family history criteria, but it's relatively easy to meet if you have a family history of cancer," she says.
Are there ways to prevent cancer with BRCA gene mutations?

Dr. Ballinger tells Health there are a few ways to reduce the risk of breast cancer if you have a BRCA gene mutation. A prophylactic bilateral mastectomy—having all your breast tissue removed—reduces a person's risk to almost zero. The alternative to a mastectomy is increased screening; Dr. Ballinger says people with a mutated BRCA1 or 2 gene typically get a mammogram and breast MRI each year, alternating every six months. Both screenings increase the odds of the early detection and treatment of cancer, should it develop.

Another option is a drug called Tamoxifen, which reduces the number of estrogen receptors in breast cells and in turn, helps to prevent estrogen-related breast cancer. Typically, Tamoxifen is used to treat people with existing cancer that's positive for estrogen-receptors, or to reduce the risk of recurrence. How well it works to prevent breast cancer depends on how high the person's risk is in the first place, according to the American Cancer Society.

"In high-risk individuals, Tamoxifen reduces the risk in about half," Dr. Ballinger says. "It's only reducing estrogen-driven cancers, which are much more common in BRCA2 mutation carriers."

Dr. Ballinger says screening for ovarian cancer can be more difficult. Doctors use transvaginal ultrasounds and blood tests to detect tumor markers, but she says those screenings—unlike breast cancer screenings—have not been proven to have an impact on survival. To reduce the risk of both breast and ovarian cancer, a person with a BRCA1 or BRCA2 mutation may opt to have their ovaries removed.

Pancreatic cancer screening is less common. If you have a family history of pancreatic cancer and a BRCA mutation, Dr. Ballinger says your doctor may recommend annual abdominal MRIs and blood tests for tumor markers. The same is true for prostate cancers.

If you do have a BRCA mutation, it's normal to feel overwhelmed. Aim to find a team of health care providers who can educate you on what your mutation means and lower your risk however possible. "It's good to take the time to gather information and think about what you want to do about your mutation, and to find health care teams you feel comfortable with to discuss the decision making," Dr. Ballinger says.