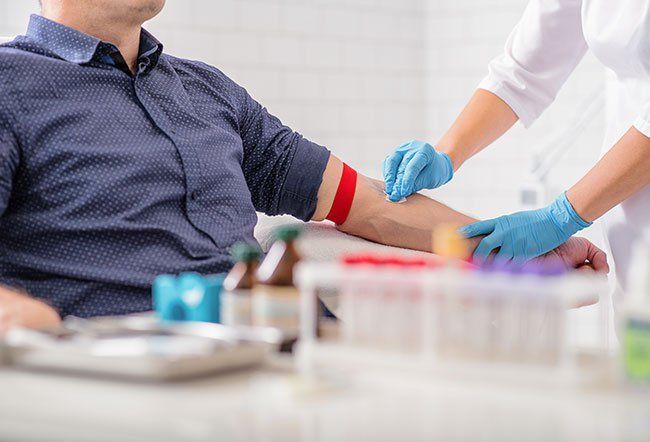 Can Doctors Tell if You Smoke From a Blood Test?

A nicotine test measures the level of nicotine or the chemicals cigarettes produce in the body. A lab examination called a nicotine test may help a doctor determine the nicotine content in a person's body.

Yes, a lab examination called a nicotine test may help a doctor determine the nicotine content in a person’s body. A nicotine test measures the level of nicotine or the chemicals cigarettes produce in the body. It's usually done by testing a sample of the blood or urine. The test is used to see if a person smokes or uses other forms of tobacco.

Nicotine is the addictive chemical found in cigarettes and other tobacco products. When a person smokes, the body breaks down nicotine and turns it into cotinine. Cotinine is the chemical metabolite that lab technicians look for when screening for nicotine use. When a person stops using nicotine, it can take more than two weeks for the levels of nicotine and cotinine in the blood to drop. It takes a few weeks after that for the levels in the urine to drop. With a nicotine test, a blood sample may be collected from a vein in the arm or a random urine sample. Sometimes, a saliva sample or, rarely, a hair sample is also used.

Nicotine can appear in the bloodstream about an hour after inhalation. A 2017 article reviewed by the College of Medicine at the University of Illinois stated that cotinine can be detected in the blood for up to 10 days after a person quits. Although a blood test is an invasive procedure, measuring cotinine in the blood is the most reliable way to detect nicotine use. It is also the preferred method for determining nicotine exposure among nonsmokers (passive smoking). A nicotine test is generally taken for legal reasons, such as while joining a new job or court demands.

What type of diet is usually recommended after smoking cessation?

Nutritionists may usually recommend a healthy diet after smoking cessation. The diet should include

Protein to keep the appetite in check that’s also good for the brain.
Nuts and seeds, which are usually recommended, to provide minerals.
Healthy fats, such as avocado, which may give a person the required energy.
Complex carbohydrates, which also help control hunger.
Drinking water at regular intervals, which may help eliminate toxins from the body.
Plenty of fruits and vegetables.
Cereals, bread, pasta and rice (whole grain options).
Lean cuts of meat, poultry and fish.

What are the common side effects after smoking cessation?

Smoking affects many parts of the body, including the heart, hormones, metabolism and brain. Apart from weight gain people may experience side effects immediately after smoking cessation. They are

How soon will I benefit after I quit smoking?

The benefits may be evident immediately and the person may feel normal within a few years.

Blood pressure and heart rate stabilize. Circulation improves.
Carbon monoxide levels in the blood reduce and may get eliminated.
Oxygen levels normalize and the risk of a heart attack is usually reduced.
Lungs can hold more air and breathing becomes easier.

Within a year or two

The risk of heart problems is reduced by half compared to that of a smoker.