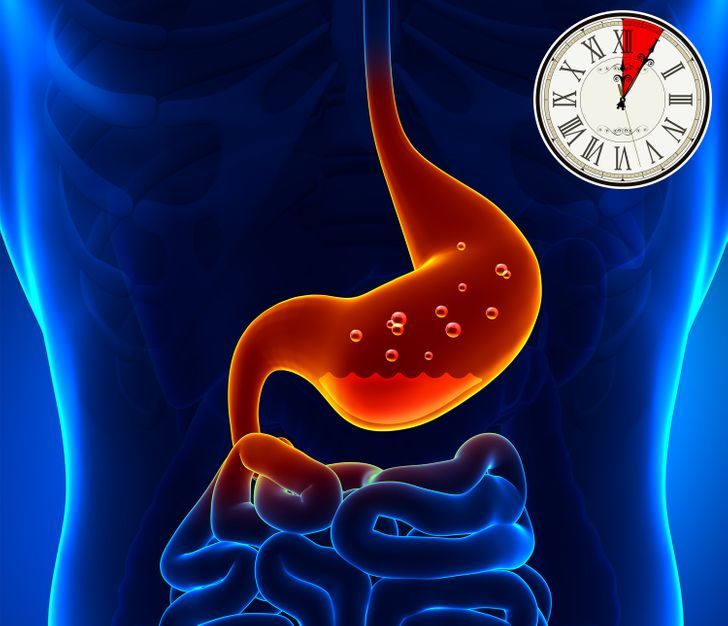 How Long Does It Take to Digest Food? The Answer Might Surprise You

Let's be real: Most of us don't appreciate the work our digestive system does for us. For the most part, once food leaves our mouths it also leaves our mindsthat is, until we eventually see the remnants again in one way or another.
But what happens to food after you swallow it? The digestive system as a whole is made up of many complex, crucial moving parts. Here's what you need to know about what happens during digestion, and how long it usually takes to digest your food.

What happens during digestion?

Obviously, the first step to digesting food is putting it in your mouth and chewing it-but your teeth don't do all of the work here. During this process, your salivary glands also moisten your food, making it easier for whatever you're eating to pass through your esophagus when you swallow, according to the National Institute of Diabetes and Digestive and Kidney Diseases (NIDDK).

After it makes its way down the esophagus, the food reaches the lower esophageal sphincter, which is a muscle that relaxes to allow the food to pass into the stomach. The stomach muscles then mix your food with digestive juices, and glands located in the stomach lining produce enzymes and stomach acid that help the food break down further.

How long does the entire digestive process usually take?

The time it takes for you to digest food-from the time you put it in your mouth to the time you excrete it-depends on many factors. (FYI: This process is sometimes referred to as your bowel transit time, according to MedlinePlus, a resource of the US National Library of Medicine.) “All in all, it takes anywhere from two to five days for people to digest food,” Rabia De Latour, MD, a gastroenterologist at NYU Langone, tells Health. “It varies in everyone,” she adds.

Lots of things can factor in to the time differences between people here, but for starters, the type of food you’re eating plays a role. High-fiber foods can speed up your digestion, Dr. De Latour says. She adds that simpler foods (think: non-processed foods) are easier to digest because it’s more difficult for your body to break down complex chemicals in processed foods. “Complex sugars, high-fat [foods], and high protein foods will take longer,” Christine Lee, MD, gastroenterologist at Cleveland Clinic, tells Health. Also worth noting: Your digestive system slows down with age, Dr. De Latour adds.

What are some health conditions that can impact how long it takes to digest food?

A number of conditions can have an effect on the digestive system not all of these necessarily slow down or speed up the digestive system, but those aren't the only two indicators that something's wrong. According to MedlinePlus, a resource from the US National Library of Medicine (USNLM), common among these are cancer, heartburn, lactose intolerance, and irritable bowel syndrome.

If you suspect your digestive system isn’t working quite right-for instance, if you’re regularly having diarrhea or you’re constipated -it’s a good idea to check in with your doctor to find out what could be causing the problem. A number of tests can be done to evaluate this area of the body, including colonoscopies, according to MedlinePlus. If you're worried something's wrong, your primary care doctor can refer you to a gastroenterologist who can complete a full workup to help you get to the bottom of what's causing problems with your digestive system. The good news is that many digestive issues can be managed with lifestyle changes.