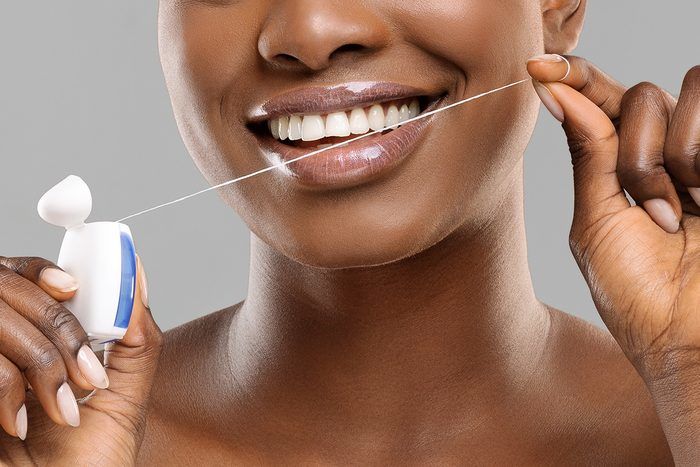 How Often Should You Floss?

How often you should floss is a question dentists love discussing. Here's what they recommend and who should be flossing more often.

It’s no secret that dentists will try almost anything to get people to brush and floss daily. And if they can get you to floss even semi-regularly, most are happy. Still, if you want to do more than the bare minimum for your oral health, how often should you really be flossing? (You know, not just before a dentist’s appointment.)

We spoke with dentists and a germ expert to learn more about why flossing is so important, and more. Plus, they answer the question “how often should you floss” without shame.

Why flossing is so important

It goes where brush bristles can’t

Flossing is key because brushing alone can’t remove the food particles that trap themselves in spaces between the teeth, Tierno says. “Good, thorough brushing is important, and that gets the grooves and crevices on the top of the teeth and the smooth surfaces,” says Matthew Messina, a dentist and spokesperson for the American Dental Association. “But there are places in between the teeth, underneath the contact where the teeth touch, and underneath the gum line, that you can’t get at with a toothbrush,” he says. So we need to find another way-flossing-to get food out of there.

While news stories a few years back suggested that the evidence for the benefits of flossing were “weak,” that was more about a lack of rigorously controlled clinical trials of a health hygiene practice that has been recommended by the federal government since 1979. Dental professional groups like the Canadian Dental Association and the American Dental Association say flossing has clear benefits. “When you floss, you look at the crud that comes out in between the teeth, and under the gum lines on the floss, it becomes pretty obvious to say why would we want to leave that there,” says Messina.

Here are the benefits of flossing, according to dental professionals:

The mix of bacteria in the mouth and food sitting there irritates the gum tissue, and is a breeding ground for even more bacteria, according to Dr. Messina. Plus, dentist Mark Burhenne, founder of AsktheDentist.com, adds that the bacteria of the mouth very quickly and easily consume western diet food like packaged and processed foods. “Certain bacteria like Streptococcus mutans become more populous because of the starchy foods you’re eating,” Dr. Burhenne says. “Then they become very organized, and they’re sitting on your teeth, then you’ve got a problem.”

Meanwhile, flossing regularly disrupts the bacteria and disturbs their presence underneath the gum line. This is key since bacteria burn or feed on the sugars in food particles, eventually dissolving tooth enamel and causing cavities, Dr. Messina explains. That oral bacteria in the mouth that are breaking down that stuck food may also lead to gum inflammation, swelling, infection, and bad breath, too.

If you ever wonder why your gums bleed when you floss, that’s because of inflammation in the area. It’s the body responding to the presence of bacteria by bringing white blood cells to the area. And no, it doesn’t mean that you’re flossing “wrong” or cutting the gums. In fact, the inflammation is the problem, not the flossing. “This can cause bone loss around the teeth, bone running away from the bacteria, and swelling and puffiness gum tissues,” Dr. Messina says. Worst-case scenarios include bone loss, loose teeth, and loss of teeth, per Dr. Messina.

Dr. Burhenne adds that blood when you floss ironically occurs because you’re not brushing or flossing enough in the first place.

So, how often should you floss?

Once a day is all you need, according to Dr. Messina. His reasoning? It takes the colonies of bacteria in your mouth 24 hours to organize, per Dr. Messina. “They are at their most dangerous when the colonies are organized,” he says. The Canadian Dental Association also recommends cleaning between the teeth once a day using floss. Dr. Burhenne recommends flossing every time before you brush your teeth so that the toothpaste ingredients can work. “Why waste your time with toothpaste if it’s not getting to where it’s supposed to be getting?” he asks.

The floss breaks apart biofilm on the teeth and allows the ingredients in the toothpaste to get to the proper areas and help your teeth. Note that flossing doesn’t totally remove this bacteria, but it does disrupt them. That’s why Tierno recommends flossing after each meal because no matter when or what you eat, food can stick. Although, Dr. Messina says that’s probably asking too much. “Sure, that would absolutely be nice, but I try to live in the real world, and I never ask people to do things I don’t think they can do because that’s a prescription for frustration on everybody’s part,” he says. “I think everybody can give us brushing twice a day, and flossing once a day; that’s achievable.”

Dr. Burhenne adds that the goal is to make it practical for people to floss. “If we ask them to floss twice a day, they’re not gonna do it, which means they won’t floss at all,” he says. But if you can get them to do it at least once a week, that’s the first step to building the habit.

Who should floss more?

Remember, everyone has a unique set of teeth. For some people, because of their natural spacing, food may trap in between more often. “Literally, you have to pay attention to your own needs and look at yourself in the mirror,” Tierno adds.

If certain foods always stick in the same spot, that’s your sign to floss well in that area. “If you’re getting food trapped after every meal, you’re going to have to floss it,” Dr. Burhenne says. This may be common in people with significant space between the teeth.

The same is true if you have an open contact, a space between the teeth if they shift after dental work. Dr. Burhenne recommends putting a knot in your floss to help remove food from this area. People with gum disease also shouldn’t shy away from flossing since disrupting that biofilm, bacteria, and plaque is the best thing you can do, according to Dr. Burhenne.

Anyone with oral disease should be flossing more often. So should people who are mouth breathers, Dr. Burhenne adds.

Something is always better than nothing in terms of flossing. And you can’t floss too often, according to Dr. Burhenne. “A lot of times people tell me there’s no way they can floss every day,” Dr. Messina says. They use that as an excuse not to start. “My answer to that is if we know that daily or once every 24 hours is best, I’ll take anything I can get,” he says.

If you’re willing to floss on weekends, or two days a week, it’s a start. Dr. Messina says that once most people start flossing regularly, even if not daily, it becomes muscle memory and an easy practice. They get used to it and always notice a difference in their gums and teeth, motivating them to increase their flossing frequency.

Dr. Burhenne says he’s seen statistics claiming as few as 28 percent of people in Canada floss more than five times a week. Many people find it uncomfortable, painful, or difficult to do. That’s why Dr. Burhenne is a fan of floss sticks because using them takes very little coordination. Other options include water flossers or traditional dental floss. Although it might not be the most fun, experts agree that there are plenty of reasons to floss.