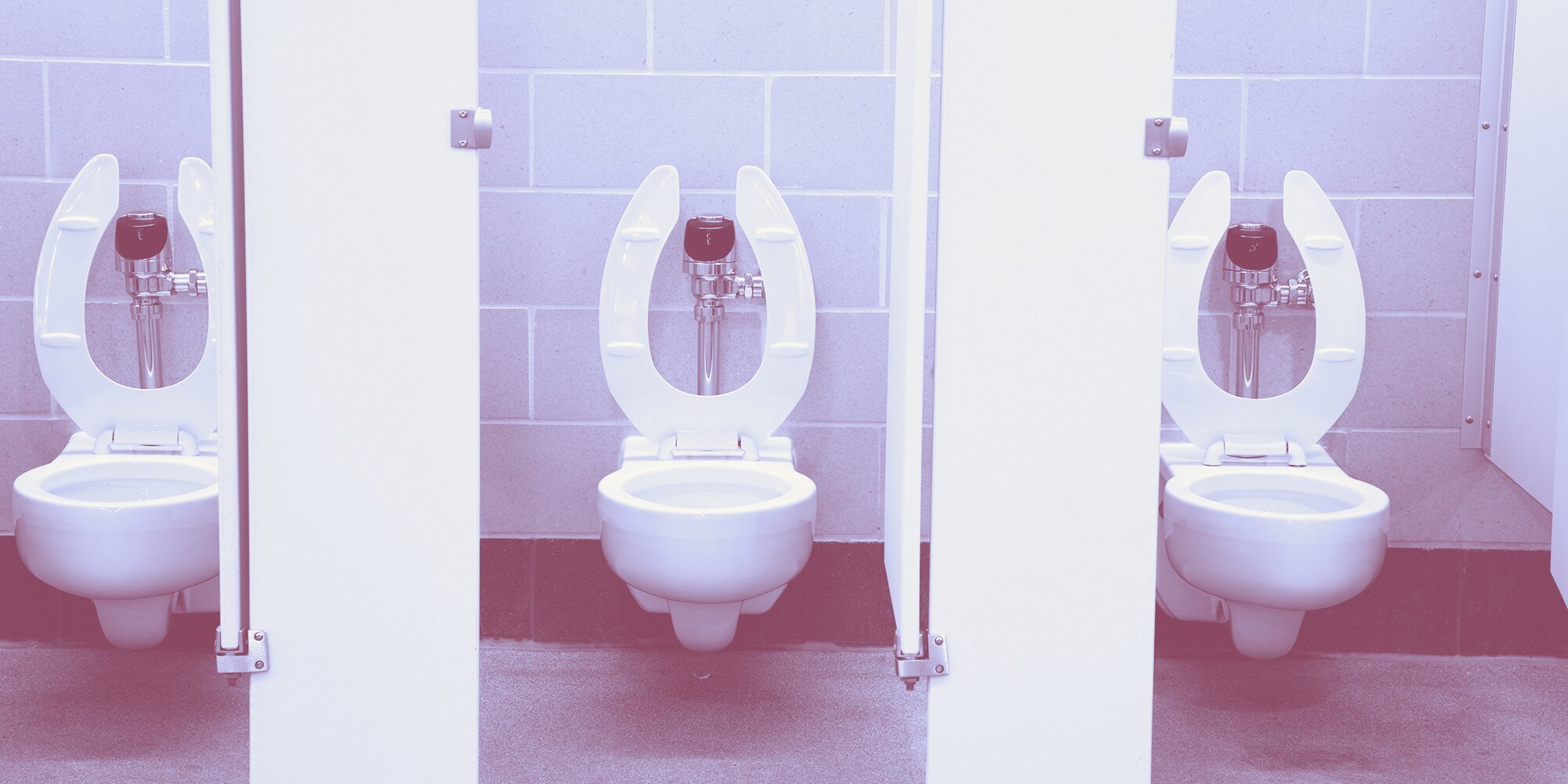 Public Restrooms Are Major Germ Zones-Here's How to Stay Safe

Coronavirus, flu, colds, and other nasty bugs lurk around toilets, stalls, and faucets.

You might not be spending as much time in public places as you did pre-pandemic, but sometimes using a public restroom is necessary. So what can you do to avoid harmful viruses and bacteria when you've gotta go? While COVID-19 is probably the first threat that comes to mind, it’s also cold and flu season. That means lots of nasty bugs are lurking in the air or on surfaces, ready to get into your body primarily via your eyes, nose, and mouth and make you sick.

“A public bathroom is a petri dish,” Carol A. Winner, MPH, founder of the Give Space personal distancing movement in 2017, tells Health. “Considering the number of steel surfaces, doorknobs, and toilet handles, it’s important to use caution.” According to the Mayo Clinic, cold and flu viral particles can live on hard surfaces for several hours. Much about the coronavirus is still unknown, but the Centers for Disease Control (CDC) says that "the virus can survive for a short period on some surfaces."

Then there's the toilet itself. Simply flushing can expel as much as 60% of produced aerosols (fine solid particles or liquid droplets formed from the contents in the bowl, from you and even others before you) three feet into the air above the seat, reported a June study in the journal Physics of Fluids. This phenomenon is known as “toilet plume” or “toilet turbulence," and it can be filed under “things the average person worries about now that they didn’t used to.”

When it comes to restroom safety, it’s important to note the difference between a virus and bacteria. A bacterium is a microorganism that can live on its own for longer periods than a virus. One example found in restrooms is E. coli, which can be present in feces and if accidentally ingested causes diarrhea, vomiting, and other potentially serious GI distress.

A virus, on the other hand, "requires a host, which is you,” says Winner. The combination of bacteria and the coronavirus could prove to be a double whammy. “Bacteria can wreak havoc on our gut, among other things, and of course when we’re not healthy and have to fight other conditions, we are most vulnerable to secondary infection,” explains Winner. “The coronavirus is quite virulent, so extra care must be taken in public places.”

You don’t have any control over what other people do in a public restroom, or how well (and how often) it’s cleaned. But there are plenty of steps to take to avoid coming into contact with infectious germs-like these eight below.

Practice social distancing in the restroom

You've heard it a zillion times, but the advice applies to public restrooms as well: Stay six feet away from other people, and if you can't, keep a face mask or covering over your mouth. If the restroom isn't that big, or it's a smallish room with just a few stalls rather than a large room with multiple stalls, make sure you're the only person using it at the time.

Cover your hands so you don't touch surfaces directly

Using a public restroom requires touching lots of potentially germy surfaces, from door handles to faucets to stall doors to toilet paper dispensers. To avoid picking up bacteria and viral particles, arm yourself with wipes and tissues, so you'll always have something to cover your hand with and won't touch these surfaces directly. (Carry them in your purse, so you're covered even if the restroom doesn't have its own stash.)

Get in and out as quickly as possible

The longer you stay in the restroom, the higher your odds of encountering viral particles or bacteria, Anne Rimoin, PhD, MPH, professor of epidemiology at UCLA Fielding School of Public Health, tells Health. That doesn’t mean just doing your business in a hurry and skipping out on hand-washing and drying-these are super important when it comes to saying germ-free (more on it later). But it is a warning against hanging around while your friends are using the restroom, or deciding to redo your makeup or fix your hair when you really don't have to.

Mask up on the toilet

Remember the "toilet plume" study mentioned above, and how particles from the toilet can spray up to three feet from the bowl after you flush? To avoid this, keep your mask on when you go. Also, turn your face away from the toilet bowl after flushing, advises Winner. Then exit the stall ASAP, closing the door behind you.

Once your mask is on, leave it alone. “Make sure not to touch your mask after touching anything within the bathroom, from door or stall handles to faucets or soap dispensers,” says Rimoin. Doing so can easily transfer germs from your hand to your mask, which puts them close to your eyes, nose, and mouth-the entry points for the coronavirus as well as cold, flu, and other infections. When you’ve left the restroom, you can remove your mask and dispose of it or take it home to be washed.

It goes without saying that washing your hands is the first thing to do after using the toilet in a public restroom. Here's a reminder why: Washing with soap and warm water for at least 20 seconds is the most effective way to rid your hands of viral particles and bacteria. If there's no soap, use hand sanitizer; it's not as effective but is definitely better than not washing at all.

Unfortunately, many people skip this important step; recent research found that only 65% of women and 31% of men wash their hands after using the restroom. “Don’t be that person ever, and especially during a pandemic, as you can actually wreak harm on others by contaminating environments all around you,” warns Winner.

Dry your hands with a paper towel

When you’re done washing your hands, dry them with a paper towel or a tissue, rather than an air dryer, says Winner. “Research tells us that viral particles and bacteria can fly around up to 15 feet in the air” from one of these air dryers, according to Winner, citing a 2015 study published in the Journal of Applied Microbiology.

Dry them right after you finish washing. "Germs can be transferred more easily to and from wet hands,” states the CDC. If you don't have any paper towels or are out of wipes or tissues, use the dryer rather than leave the restroom with your hands wet.

After you've dried your hands with a paper towel, don't chuck it into the waste basket just yet. Instead, use it to open the door handle-which is often a steel surface that's potentially covered in germs-so you can exit the restroom and get on with your day, suggests Winner. "Discard it on the other side,” she adds.

Stay off your smartphone

We know it's hard to resist temptation, but your phone is a germ magnet of it's own, and touching it while you use a public restroom boosts the risk of transferring germs to your phone...where they can easily get in your mouth or nose and make you sick. “Anything you touched can contaminate the screen of your phone, and you're guaranteed to be touching it the rest of the day,” says Rimoin. You can go without it for a few minutes, so leave it in your purse until you can touch it with clean hands.