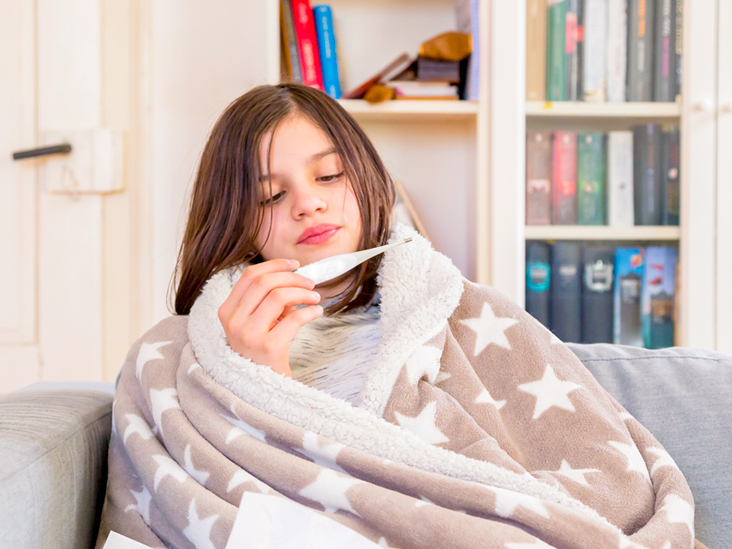 The Difference Between the Cold and Flu

It's not always easy to determine if you have a cold or the flu, but knowing the differences helps treatment work more quickly.

Your nose is stuffy, your throat is scratchy, and your head is pounding. Is it a cold or the seasonal flu? Symptoms can overlap, so unless your doctor runs a rapid flu test - a quick check done with a cotton swab from the back of your nose or throat — it’s hard to know for sure.

Here are some basic guidelines for telling the difference between cold and flu symptoms, and what to do if you have either one of these infections.

How to spot the difference

Viruses cause colds and the flu. Both are respiratory infections. The simplest way to tell the difference is by looking at your symptoms.

If you have a cold, you’ll probably have symptoms like these:

Flu symptoms can include:

dry, hacking cough
moderate to high fever, although not everyone with the flu will run a fever
sore throat
shaking chills
severe muscle or body aches
headache
stuffy and runny nose
severe fatigue that may last up to two weeks
nausea and vomiting, as well as diarrhea (most common in children)

Colds come on gradually over a few days and are often milder than the flu. They usually get better in 7 to 10 days, although symptoms can last for up to 2 weeks.

Flu symptoms come on quickly and can be severe. They usually last 1 to 2 weeks.

Use your symptoms as a guide to figure out which condition you have. If you think you might have the flu, see your doctor to get tested within the first 48 hours of showing symptoms.

What is the common cold?

The common cold is an upper respiratory infection caused by a virus. According to the American Lung Association, more than 200 different viruses can cause the common cold. However, according to the Mayo Clinic, the rhinovirus is most often the one that makes people sneeze and sniffle. It’s highly contagious.

Though you can catch a cold at any time of year, colds are more common during the winter months. This is because most cold-causing viruses thrive in low humidity.

Colds spread when someone who’s sick sneezes or coughs, sending virus-filled droplets flying through the air.

You can get sick if you touch a surface (such as a countertop or doorknob) that has recently been handled by an infected person and then touch your nose, mouth, or eyes. You’re most contagious in the first two to four days after you’re exposed to the cold virus.

How to treat a cold

Because a cold is a viral infection, antibiotics are not effective at treating it.

However, over-the-counter medications, such as antihistamines, decongestants, acetaminophen, and NSAIDs, can relieve congestion, aches, and other cold symptoms. Drink plenty of fluids to avoid dehydration.

Some people take natural remedies, such as zinc, vitamin C, or echinacea, to prevent or relieve cold symptoms. The evidence is mixed on whether they work.

A 2015 studyTrusted Source in BMC Family Practice found that high-dose (80 milligram) zinc lozenges could shorten the length of colds if taken within 24 hours of showing symptoms.

Vitamin C doesn’t seem to prevent colds, but if you take it consistently, it might lessen your symptoms, according to a 2013 Cochrane review. Echinacea hasn’t been shownTrusted Source to help prevent or treat colds. A 2017 studyTrusted Source in BMJ found vitamin D helps protect against both colds and flu.

Colds usually clear up within 7 to 10 days. See a doctor if:

You could have allergies or a bacterial infection that requires antibiotics, such as sinusitis or strep throat. A nagging cough could also be a sign of asthma or bronchitis.

How to prevent a cold

There’s an old saying that goes, “We can put a man on the moon, but we still can’t cure the common cold.” While it’s true that doctors haven’t yet developed a vaccine, there are ways to prevent this mild but annoying affliction.

Because colds spread so easily, the best prevention is avoidance. Stay away from anyone who’s sick. Don’t share utensils or any other personal items, such as a toothbrush or towel. Sharing goes both ways - when you’re sick with a cold, stay home.

Practice good hygiene. Wash your hands often with hot water and soap to get rid of any germs you might’ve picked up during the day or use an alcohol-based hand sanitizer.

Keep your hands away from your nose, eyes, and mouth when they’re not freshly washed. Cover your mouth and nose when you cough or sneeze. Always wash your hands afterward.

What is the seasonal flu?

Influenza - or the flu, as it’s better known - is another upper respiratory illness. Unlike a cold, which can hit at any time of year, the flu is generally seasonal. Flu season usually runs from fall to spring, peaking during the winter months.

During flu season, you can catch the flu in the same way you’d pick up a cold: By coming into contact with droplets spread by an infected person. You’re contagious starting one day before you get sick and up to 5 to 7 days after you show symptoms.

The seasonal flu is caused by the influenza A, B, and C viruses, with influenza A and B being the most common types. Active strains of influenza virus vary from year to year. That’s why a new flu vaccine is developed each year.

Unlike the common cold, the flu can develop into a more serious condition, such as pneumonia. This is especially true for:

How to treat the flu

In most cases, fluids and rest are the best ways to treat the flu. Drink plenty of fluids to prevent dehydration. Over-the-counter decongestants and pain relievers, such as ibuprofen and acetaminophen, may control your symptoms and help you feel better.

However, never give aspirin to children. It can increase the risk of a rare but serious condition called Reye’s syndrome.

These drugs can shorten the duration of the flu and prevent complications such as pneumonia. However, they may not be effective if not started within 48 hours of getting sick.

When to call a doctor

people over the age of 65
pregnant women
women who are two weeks postpartum
children under age of 2
children under age 18 taking aspirin
those with weakened immune systems due to HIV, steroid treatment, or chemotherapy
people who are extremely obese
people with chronic lung or heart conditions
people with metabolic disorders, such as diabetes, anemia, or kidney disease
people living in long-term care facilities, such as nursing homes

Contact your doctor right away if your symptoms do not improve or if they become severe. See your doctor if you have signs of pneumonia, including:

Call a doctor right away if your child develops the following symptoms:

However, you can still get the vaccine in late fall or winter. The flu vaccine can help protect you from getting the flu and can make the illness less severe if you do catch the flu.

To avoid picking up the flu virus, wash your hands often with soap and warm water, or use an alcohol-based hand sanitizer. Avoid touching your nose, eyes, and mouth. Try to stay away from anyone who has the flu or flu-like symptoms.

It’s important to adopt healthy habits to keep cold and flu germs at bay. You should always make sure you get plenty of sleep, eat lots of fruits and vegetables, exercise, and manage your stress during cold and flu season and beyond.