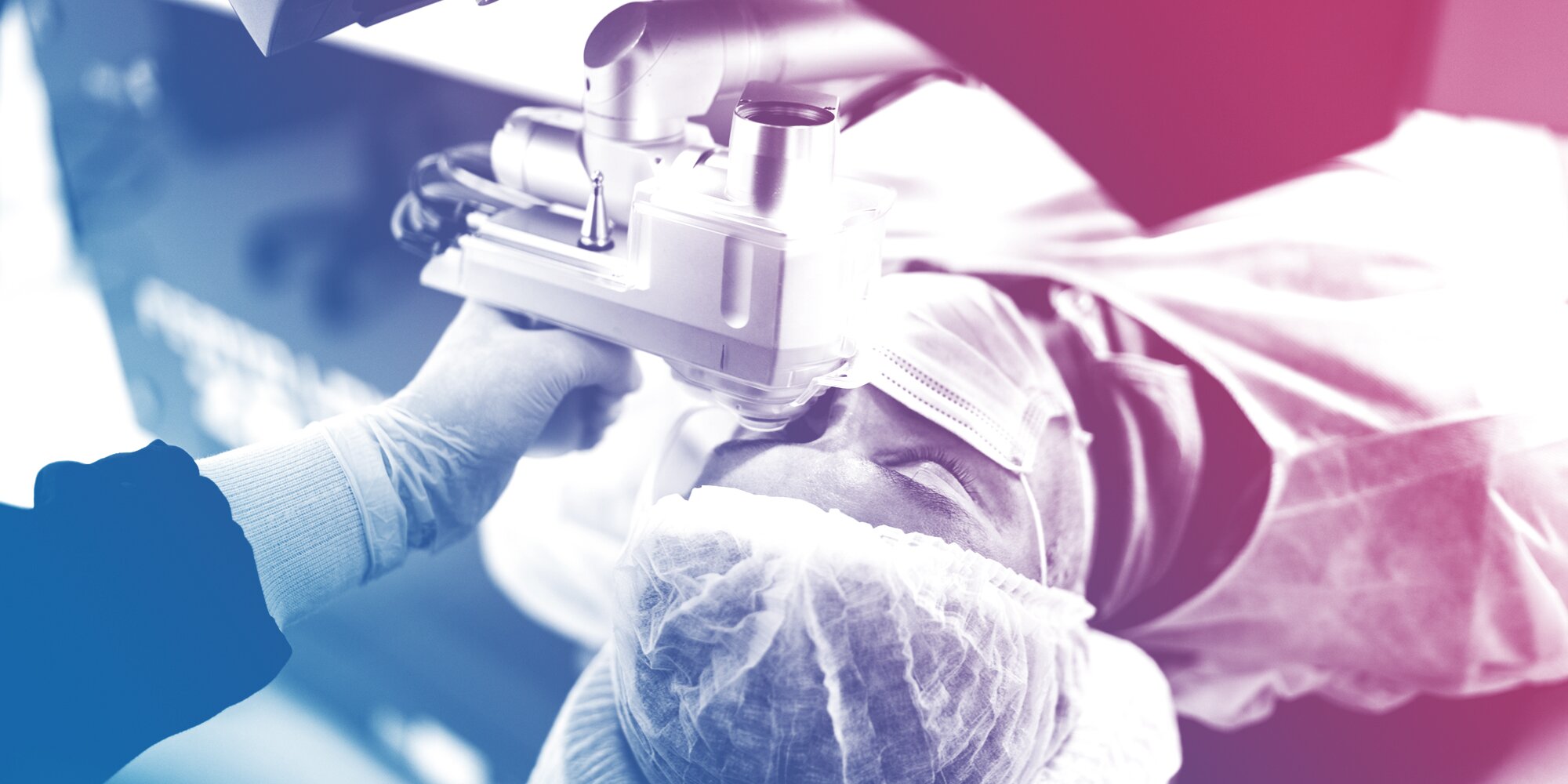 From the least-invasive options to the most, these are the surgeries that are used to effectively control eye pressure and treat glaucoma.

So, you've been diagnosed with glaucoma. "Congratulations" isn't exactly appropriate here, but there is something to celebrate: Now that you and your doctor know what's going on, you can jump on treating your glaucoma to preserve your vision moving forward.

Eye drops are the first intervention for many people with glaucoma, Christopher Starr, MD, ophthalmologist at Weill Cornell Medicine and NewYork-Presbyterian, tells Health. There are different types of eye drops that can lower pressure, either by reducing the production of aqueous humor-the fluid that keeps the eye plump and brings nutrients to the lens and cornea—or by increasing the fluid's drainage, Dr. Starr explains.

But sometimes, you may need something a little more intensive to bring down your eye pressure and keep glaucoma under control. Maybe you've tried eye drops and they did squat. Or maybe your doctor doesn't think you're a candidate. It's now time to talk about glaucoma surgery.

While no one is particularly psyched about the prospect of eye surgery, the good news is that there are actually a lot of glaucoma surgeries out there-with different levels of invasiveness-that can effectively reduce your eye pressure to healthy levels. Here's everything you need to know about the different types of glaucoma surgery, and the risks and benefits of each.

Who needs surgery for glaucoma?

Most eye doctors will try eye drops-usually a combination of different eye drops-to lower eye pressure before turning to surgery. If you give non-surgical options a solid try and they still aren't lowering your eye pressure, surgery is the next step.

The other thing to consider here: Some people really just don't like taking eye drops, Sriranjani Padmanabhan, MD, ophthalmologist and glaucoma specialist at UCSF Health, tells Health. "They can be really frustrating for patients. Eye drops are different than taking a pill; they're much more burdensome; they're harder to use and more uncomfortable," she says. Side effects of eye drops may also be too uncomfortable for some people. People who have a hard time complying with daily eye drops—and therefore, can't get their eye pressure under control—are also good candidates for surgery.

Finally, if you are diagnosed with advanced glaucoma or have acute angle-closure glaucoma, in which a blockage causes a rapid and dramatic increase in eye pressure, surgery is needed to intervene quickly to preserve vision as best as possible. "In advanced stages, earlier surgery is definitely better," Daniel Laroche, MD, director of glaucoma services and president of Advanced Eyecare of New York and assistant professor of ophthalmology at the Mount Sinai School of Medicine, tells Health.

What types of glaucoma surgeries are available?

They're often done at the same time as cataract surgery, Dr. Starr says. "We often recommended doing MIGS as an add-on, and the best-case scenario is that patients with chronic glaucoma can be taken off those drops," he says.

According to the Glaucoma Research Foundation, the different categories of MIGS procedures include:

Microtrabeculectomy: Microscopic tubes (stents) are inserted into the eye to drain fluid.
Trabecular bypass operations: Some types of glaucoma are caused by an abnormality in the trabecular meshwork, the area of spongy tissue between the cornea and iris that fluid drains through. In a trabecular bypass operation, a small incision is made in the meshwork and a tiny device is inserted. One type of device destroys the meshwork; the other is a stent that helps fluid pass through it.
Suprachoroidal shunts: This procedure uses shunts to connect the front of the eye to the suprachoroidal space-the space between the retina and the wall of the eye-to help fluid drain.
Milder versions of laser photocoagulation: Other forms of laser cyclophotocoagulation, called endocyclophotocoagulation and micropulse cyclophotocoagulation, work similarly-they target the ciliary body and stop them from producing so much fluid. These versions are gentler, though, and may be used in earlier stages of glaucoma.

There are a handful of minimally invasive laser surgeries that can be done to make the eye drain more efficiently, Dr. Starr says. These are often done in the eye surgeon's office and have minimal recovery time involved. They aren't permanent, though-typically, lasers need to be redone or eventually, eye drops, or more invasive surgeries may become necessary to keep pressure under control. Sometimes, you may need to keep using eye drops even if you undergo laser treatment.

The most common laser surgeries for glaucoma include:

Selective Laser Trabeculoplasty (SLT): Laser trabeculoplasy is becoming more popular as a first- or second-line therapy for open-angle glaucoma, says Dr. Padmanabhan. A special laser is used to remodel the current drainage in the eye. "It works quite powerfully, is easy to do, well tolerated with minimal side effects, and lasts two to five years," she says. "If a patient has a profound response, it might save them from taking eye drops for another 10 years."
Argon Laser Trabeculoplasty (ALT): Also used to treat open-angle glaucoma, ALT uses a laser to open up the drainage areas of the eye. Typically, half of the area is treated in one session, and then if necessary, the other half will be treated at a later time. ALT is typically not effective a second time.
Laser Peripheral Iridotomy (LPI): According to the Glaucoma Research Foundation, LPI has been used since 1984 to prevent and treat angle-closure glaucoma, which happens when the iris blocks the area where the iris and cornea meet, preventing fluid from draining properly. The procedure creates a small hole in the outer edge of the iris to essentially open the angle in the eye so that fluid can freely drain through the meshwork. LPI can also be used preventively in people who have a closed angle and are deemed high risk for glaucoma, even if they still have normal eye pressure.
Laser Cyclophotocoagulation: This type of laser is typically used in advanced glaucoma. It works by targeting the ciliary body, the area behind the iris that actually makes the aqueous humor, to curb the production of fluid.

Trabeculectomy is known as the gold standard of glaucoma surgery or those with advanced open-angle glaucoma, Dr. Laroche says. It's a more invasive surgery than MIGS or laser procedures and has a higher complication rate, but it typically does a very good job of lowering eye pressure, he says. During a trabeculectomy, the surgeon will make a small incision in the white part of your eye (the sclera) and remove a portion of the meshwork so that the eye can drain better. It's typically an outpatient surgery-meaning, you can leave the hospital the same day-and the procedure takes about an hour to complete.

Implant surgery is a type of glaucoma surgery that involves inserting drainage tubes into the eye. It's typically used to enhance a trabeculectomy, keeping the surgically added drain open and fluid flowing through it as intended. According to the Glaucoma Research Foundation, implant surgeries are usually done to treat "complicated glaucomas" and glaucoma that happens as a result of an eye injury. They're also used to treat congenital glaucoma (in babies born with glaucoma) and neovascular glaucoma, which happens when certain medical conditions cause blood vessels to overgrow in the eye and block the drainage area. This is also an in-hospital outpatient surgery.

What are the risks of glaucoma surgery?

Just like all surgeries, glaucoma surgery comes with risks-and some procedures are riskier than others.

MIGS procedures were created specifically to be less invasive and risky than other glaucoma surgery options (which is also why they aren't always as effective and usually work best for people in the early stages of glaucoma). The most common side effects with MIGS procedures are bleeding in the eye and a short-term increase in eye pressure post-procedure.

Common side effects of laser surgeries include swelling and soreness. They can also cause dry eye or a scratched cornea—both of which can be painful, but usually will heal quickly. Irritation and blurry vision are also common right after a laser treatment, but side effects usually subside by the next day.

Invasive surgeries like trabeculectomy and implant surgery come with more risks and recovery is much longer. These procedures come with a risk of infection, and increase your chance of developing cataracts over time, Dr. Laroche says. They can also cause problems with the cornea, too-low eye pressure, and vision loss, according to the National Eye Institute. "That's why you really want to make sure to do this with a really skilled surgeon," Dr. Laroche adds. Recovery can take a while, too. "It's usually about a month before patients feel like themselves again," Dr. Padmanabhan says. "You'll be on post-op medication for a month, your vision will probably be blurry for a while." Depending on the surgery, you may need to go back in to have sutures removed.

You can reduce your risks and make the experience go more smoothly by working with a qualified and experienced eye surgeon who specializes in glaucoma surgeries. And despite the potential side effects, glaucoma surgeries can be very effective in lowering eye pressure and preserving the optic nerve. They may ultimately be necessary to get your eye pressure in check and keep you from losing any vision to glaucoma.