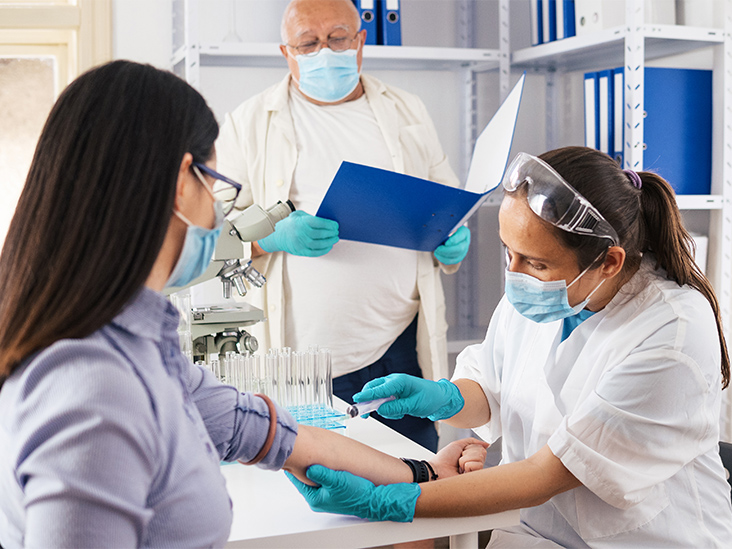 Galleri is a new blood test that has the ability to detect 50 types of cancer through a single blood draw. Select U.S. health systems will begin using it this year.

Forty-five of those cancer types don’t currently have another recommended screening.
Experts say Galleri has the opportunity to revolutionize cancer screening, potentially leading to reductions in the human and economic toll of cancer.
Select U.S. health systems have begun to offer Galleri as a complement to single cancer screening tests.

Seven years ago, scientists at Illumina, the DNA sequencing company in San Diego, were running a study seeking DNA fragments in pregnant people’s blood that might suggest chromosomal abnormalities.

During the research, a pathologist discovered something unexpected in 10 of the blood samples.

Instead of chromosomal disorders, the testing showed DNA abnormalities.

This didn’t make sense to the researchers. But there was some suspicion that cancer was involved.

Investigating further, the researchers learned that one of the 10 participants had in fact received a cancer diagnosis, and others in that subset also had cancer - despite the fact that they had no symptoms.

This convinced Illumina’s leadership to create a spin-off company in 2016 called GRAIL that combined advances in human genomics with machine learning data science.

That resulted in the development of a new blood test from GRAIL called Galleri, which can detect early stages of cancer before a person has symptoms.

In clinical studies, an earlier version of Galleri showed the ability to detect more than 50 types of cancer - 45 of which lack recommended screening - through a single blood draw.

A study done this year with 6,600 participants that included the Mayo Clinic discovered 29 signals that were followed by a cancer diagnosis. Another study reported a false positive rate of less than 1 percent.

Overall, GRAIL has enrolled more than 134,000 people in clinical trials of the blood test. The test also shows where the cancer is located.

“When a cancer signal is detected in these trials, the test also pinpoints where the cancer is located in the body with high accuracy,” Dr. Joshua Ofman, chief medical officer and head of external affairs at GRAIL, told Healthline. “This helps healthcare providers to determine next steps for diagnosis and care.”

GRAIL, which was reacquired by Illumina for $8 billion, inked a partnership earlier this year with pharmaceutical companies Amgen, AstraZeneca, and Bristol Myers Squibb.

GRAIL also signed an agreement with the U.K. National Health Service (NHS) to support the NHS’ long-term plan for earlier cancer diagnoses in an effort to save lives.

The partnership program will reportedly involve approximately 165,000 people in the United Kingdom. It includes two groups.

The first will include 140,000 people over the age of 50 without any suspected cancer.

The second will include 25,000 people 40 and above with suspected signs or symptoms of cancer.

“Based on data from this U.K. program, access to the test could be expanded to around 1 million people across 2024 and 2025 and may roll out to a larger population thereafter,” said Ofman, who noted that Galleri is intended to be a complement to existing recommended screenings, not a replacement.

But, he said, “We believe Galleri has the opportunity to revolutionize cancer screening, potentially leading to reductions in the human and economic toll of cancer.”

In March, GRAIL announced that Providence, a leading regional health system based in Renton, Washington, will be the first U.S. health system to offer Galleri as a complement to single cancer screening tests.

The Galleri test initially will be used by Providence at its California, Washington, and Oregon points of care. It could eventually be available across Providence’s entire seven-state footprint.

“When combined with the power of our genomics research, having a single blood test that can detect more than 50 cancers advances our goal of finding cancer early, enabling our providers to administer treatment when it’s most likely to be successful and giving our patients the opportunity to achieve the best possible outcomes,” she said in a press statement.

Hans Bishop, the former CEO of GRAIL, said in the statement in March 2021 that GRAIL’s partnership with Providence “moves us that much closer to making a tremendous and potentially life-altering difference for patients and providers.”

In addition, the test will be available by the end of this year in Mayo Clinic facilities in Rochester, Minnesota as well as Jacksonville, Florida, and Phoenix, Arizona.

People can request the test from their doctor. Health insurance, however, doesn’t yet cover it. People need to pay $949 out of pocket to cover it

What Galleri could mean for cancer patients

Cancer is projected to become the world’s leading cause of death this year.

While the cancer death rate in the United States has declined, more than 600,000 Americans will die from cancer in 2021, according to the American Cancer SocietyTrusted Source.

This is largely because the majority of cancers are found at later stages when treatment may be more difficult.

“We’ve been waging a war against cancer for decades - from Richard Nixon’s declaration to the Biden Moonshot. But we are still not winning this war,” Ofman said.

“We are still diagnosing the disease far too late, when it’s in its metastatic state. Recommended screening tests save lives, but they only cover five cancer types and screen for a single cancer at a time.”

Ofman said that the cancers responsible for 71 percent of cancer deaths have no recommended early detection screening.

Even blood tests on people with blood cancers such as lymphoma and leukemia were ironically not the most effective way of determining whether a person has cancer.

But blood-testing technologies are now changing the way the disease is diagnosed and treated.

GRAIL’s technology is just the tip of the iceberg in terms of how genetics are revolutionizing cancer care.

In cancer biotech circles, the term “blood test” is out and the term “liquid biopsy” is in.

A liquid biopsy simply means an examination of cancer-related material (like DNA) from a blood sample.

Liquid biopsies haven’t yet replaced a tumor biopsy. But most people interviewed for this story agreed that liquid biopsies are showing great promise in facilitating individualized approaches to cancer treatment.

2 new tests have been approved

The Food and Drug Administration (FDA) approved two blood tests earlier this year that can help guide treatment decisions for people with cancer.

The tests, Guardant360 CDx and FoundationOne Liquid CDx, are made by different companies and were approvedTrusted Source separately.

Oncologists have historically based treatment decisions on features like the organ in which the cancer started growing, whether the cancer has spread, and whether the patient has other health conditions.

Now they often use genetic changes in the tumor, according to the National Cancer InstituteTrusted Source.

The newly approved blood tests identify genetic changes, including mutations, by scanning DNA in the blood.

Both Guardant360 CDx and FoundationOne Liquid CDx are approved for people with any solid cancer (lung, prostate, etc.).

The holy grail in cancer care

Most scientists interviewed by Healthline agreed that there’s great potential for Galleri and other next-generation blood-based tests to change the way cancer is diagnosed and treated.

“The ability to detect cancer before imaging or clinical exam is, as the namesake of this test suggests, one of the holy grails in cancer care,” Dr. Sandip Patel, a medical oncologist at Moores Cancer Center at UC San Diego, told Healthline.

Patel said that while there still needs to be more data collected from GRAIL’s Galleri test, “The promise of this approach is boundless, and we are just starting to see the potential in what over time will be an increasingly accurate test.”

Patel added that while the Galleri data on the false-positive rate of less than 1 percent is “very reassuring,” he agrees with GRAIL’s Ofman that Galleri should be used in addition to existing screening.

“It would be premature to stop approved screening paradigms,” Patel said.

The test is a descendant of the Human Genome Project

Ofman said that the Galleri test is a direct descendant of the Human Genome Project, which ushered in the era of precision medicine 2 decades ago.

“Cancer is a disease of the genome,” Ofman posited.

“What this means is that cancer has specific genomic alterations — the DNA in the cancer cells carry cancer-specific signals.”

Tumors shed this DNA into the blood, Ofman explained.

“We now know that these DNA fragments and their cancer-specific signals can be detected to identify cancer from a simple blood draw,” he said.

When a cancer signal is detected, GRAIL’s blood test can determine where in the body the cancer is located with high accuracy, all from a single blood draw, Ofman said.

“Galleri could be one of the first examples of a technology derived from insights from the Human Genome Project to have an impact on the broader population level,” he said.

Ofman, a gastroenterologist and health services researcher at UCLA/Cedars-Sinai before joining Amgen, the drug company where he spent more than 15 years, said he came to GRAIL to help tackle one of healthcare’s greatest challenges:

“The opportunity to make a major impact on public health by bringing innovation in genomics and AI [artificial intelligence] to improving early cancer detection to bend the cancer mortality curve drives my focused efforts every day,” he said.

“This is a once-in-a-lifetime opportunity to bring potentially life-altering innovative technology to patients.”