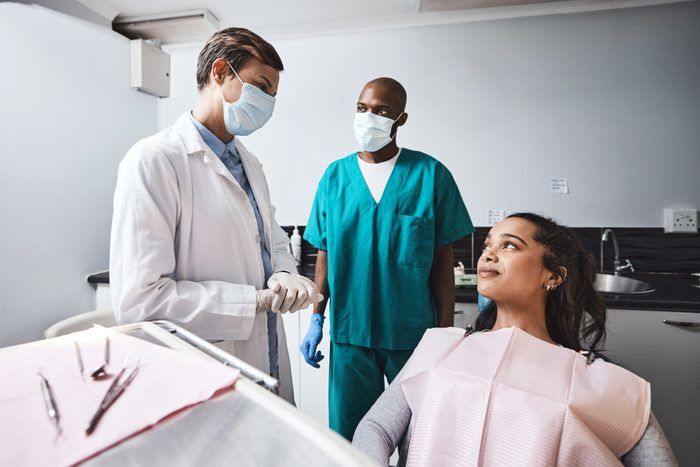 What Can You Expect from a Root Canal?

Root canals can save or repair an infected or damaged tooth. Here are the answers to all your questions about the procedure, including how long it takes, how much it costs, and more.

Even if you’ve never had a root canal, chances are you’re familiar with the term. Like most people, you probably associate with an unpleasant dentist visit. And pain-a whole lot of pain. While the latter part isn’t necessarily true about the procedure itself, it may be what makes you schedule a root canal in the first place. A damaged tooth in need of a root canal may result in further pain, damage, or a dental emergency.

Here’s what experts want you to know about getting a root canal, including how long it takes, how much it costs, and more.

What is a root canal?

A root canal is a treatment for a severely damaged or decaying tooth, or for serious tooth infection or abscess (a pocket of pus often caused by an infection). The root canal treatment serves to repair and salvage your tooth instead of removing it.

According to Helen Martinez-Barron, a dentist at Pearland Family Dentistry in the Houston area, when the bacteria from a cavity, crack, or trauma causes pulp exposure, a root canal becomes necessary. The pulp includes nerves, blood vessels, and connective tissue at the core of the crown above the gum and in the roots that extend into the jaw. During dental work, such as getting a filling or crown, the pulp can become inflamed. This increases in likelihood with more-invasive procedures or the removal of larger cavities. And it makes it more likely you’ll need a root canal.

Do you need to prepare for the procedure?

Dr. Martinez-Barron doesn’t typically give her patients any specific recommendations prior to a root canal because it’s a relatively short, minimally invasive procedure. “One suggestion I might make is to wear comfortable clothes since they’ll be in the chair an hour or two,” she says. “Also, be prepared with some sort of pain control. I usually recommend over-the-counter anti-inflammatory drugs such as ibuprofen or naproxen and very rarely prescribe any controlled substances.”

Alan S. Law, president of the American Association of Endodontists, a board-certified endodontist, and president of The Dental Specialists in the Minneapolis-St. Paul area, says most root canal treatments are similar to other dental procedures. That is, there is no special preparation required, and you don’t need to avoid eating before the procedure.

How long does a root canal take?

Root canals are usually completed in one or two visits, either by a general dentist or endodontist (a dentist who specializes in root canals), Dr. Martinez-Barron says.

“Typical appointments include time for diagnostic tests, a review of the procedure, time to get numb, the root canal procedure, and post-treatment instructions,” Dr. Law says.

“The length of the procedure depends on several factors, such as whether it’s a molar, premolar, or anterior tooth,” says Dr. Martinez-Barron. “Molars can take anywhere from 45 minutes to two hours, and a premolar or anterior tooth can take 30 minutes to an hour. It all depends on the complexity of the root anatomy and patient cooperation.”

During the procedure, your dentist or endodontist will numb the tooth. To keep the tooth free of saliva and to prevent you from swallowing of the small tools used during the procedure, your dentist will put a rubber sheet called a dental dam over the tooth. Once the decay is removed, your dentist will access the dental pulp via a small hole on the crown and, using small instruments called files, remove the pulp. After that, the root canals are flushed, disinfected, and dried. The canals are then filled with a material called gutta-percha. Then the dentist will place a filling in the crown of the tooth. Typically, a prosthetic crown is recommended to return the tooth to proper form and function, Dr. Martinez-Barron says.

How long does recovery take, and what does it entail?

After a root canal, the area around your tooth will stay numb for a few hours, Dr. Law says. During this time, you won’t be able to feel your tongue or lip, so you’ll need to be careful to avoid accidentally biting them. If the tooth that had the root canal treatment does not have a crown on it, you’ll continue to avoid eating hard, crunchy, or chewy foods, which can potentially break out the filling or break the tooth, Dr. Law says. You’ll take this precaution until the final restoration is on the tooth.

“After root canal treatment, most patients can expect mild to moderate discomfort that can be managed with over-the-counter pain medications like ibuprofen [Advil or Motrin] or acetaminophen [Tylenol],” Dr. Law says. “If patients have pain that is not managed by over-the-counter medications, they should call their dentist because they may need a prescription medication.”

Discomfort after a root canal is most common on the first day after treatment-once the numbness wears off, that is-and typically resolves within a few days, Dr. Martinez-Barron says.

On top of pain, you may experience some swelling after a root canal. It’s not common, says Dr. Law, but it’s more likely if you had an advanced infection in the tooth. “This is why it is important to treat dental infections before they advance to severe pain and swelling,” he says.

You may want to give you dentist a call if you’re in a ton of pain and have swelling. “Signs that something has gone wrong are severe pain and or swelling,” Dr. Martinez-Barron says. “Generally, you should feel a lot better than you did prior to the procedure, as [you likely had] a toothache prior to the visit.”

How much is a root canal?

The average cost of a root canal varies widely. If you have dental insurance, it might cover part of the procedure. And if you don’t, there are a few different ways to access affordable dental care. You may want to look into public health clinics, dental schools, and charities that may offer cost-effective options.

The price of a root canal also depends on which tooth needs the procedure. Molars and premolars are typically more expensive than front teeth, for example. On average, the procedure can cost anywhere from $700 to $1,800 out of pocket. Other things that impact the cost of a root canal include where you live, how much damage there is to the tooth, and whether you need a consultations or X-ray.

Root canals are an effort to save your tooth, but sometimes there is too much damage to complete the procedure. You may lose the tooth. Developing an abscess at the root of the tooth is another risk. This occurs if some of the infected material is left behind.

How can you prevent root troubles and avoid a root canal?

According to Dr. Martinez-Barron, bacteria and decaying material necessitating a root canal can cause a serious infection. Signs and symptoms of this include swelling, tooth pain, and temperature sensitivity, if left untreated.

“Deep cavities can be avoided with good oral hygiene and regular dental visits, and cracks in teeth can be avoided by avoiding hard foods [such as hard candy, ice cubes, and unpopped popcorn kernels] and avoiding grinding and clenching,” says Dr. Law. While dental trauma is most common in younger patients and not completely avoidable, it can be minimized by wearing a properly fitted mouth guard, Dr. Law says. Night guards, worn while sleeping, can help to reduce behaviors like clenching or grinding.

The best way to prevent a root canal is by having healthy dental hygiene habits. But if you suspect something is wrong, don’t hesitate to visit your dentist sooner rather than later. Your dentist can help ease any concerns and make the procedure go as smoothly as possible.