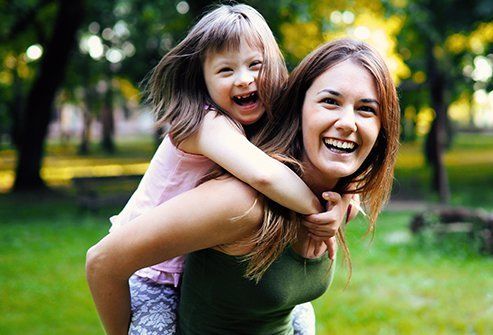 What Chromosome Causes Down Syndrome?

Down syndrome (trisomy 21) is most commonly caused by chromosome replication errors in which there are three copies of chromosome 21 instead of two.

Normally, the human body has 23 pairs of chromosomes (called autosomes) and two sex chromosomes (allosomes). At conception, a new cell is formed that receives one copy of each chromosome from the sperm and one copy from the egg. The new cell divides and multiplies to form an embryo and ultimately a fetus and new human. Each cell contains the exact same genetic material as the original 46 chromosomes, carrying the same genes and DNA.

Does an extra chromosome cause Down syndrome?

In people with Down syndrome, an error occurs in the coming together of chromosome 21. The extra genetic material is responsible for the developmental abnormalities that occur. Instead of 46 chromosomes plus two sex chromosomes, there are 47.

The most common error in chromosome replication is trisomy 21, where the new cell gets three copies of chromosome 21, instead of two. This accounts for about 95% of those patients with Down syndrome. Translocation describes a less common event where an extra piece of chromosome 21 gets attached to another chromosome, again delivering more genetic material to the new cell than is needed.

Mosaic Down syndrome occurs when there is a combination of cells with the normal number of chromosomes (46+2) mixed together with those containing a third chromosome 21 (47+2). The cells with normal chromosomes can moderate the effect of the trisomy 21 cells and modify the effect on the patient's physical and mental development.

Genotype is the term used to describe the genetic makeup of a person and for most people with Down syndrome, it is 47+2. Phenotype describes the physical and functional capabilities of a patient. In individuals with Down syndrome, there is great variability in phenotype.

What is Down syndrome (trisomy 21)?

Down syndrome is a genetic disorder and the most common autosomal chromosome abnormality in humans, in which extra genetic material from chromosome 21 is transferred to a newly formed embryo. The extra genetic material causes changes in the development of the embryo and fetus resulting in physical and mental abnormalities. Each person with Down syndrome is unique and there can be great variability in the severity of symptoms.

What are the signs and symptoms of Down syndrome?

The baby with Down syndrome has a hallmark appearance. However, every aspect of the appearance does not need to be present as the phenotype, the way the genes make the child look, can be markedly different for each patient.

6 Common Down syndrome symptoms are:

there are a small head and short neck,
a flat face, and upward slanting eyes,
ears are flat and positioned lower than “normal,”
the tongue protrudes and seems to be too large for the mouth,
hands tend to be wide, with short fingers and there is just a single flexion crease in the palm, and
joints tend to be more flexible and muscles may lack tone.

The patient may have growth retardation and though a baby may be normal size, will not grow as tall.
The average height for an adult male with Down syndrome is 5 ft 1 in and for a female it is 4 ft 9 in.
Bowleggedness is common.
Obesity occurs with aging.

There is decreased mental function and the IQ may range from mild disability (50 to 70) to moderate (35 to 50).
For patients with Mosaic Down syndrome, IQ can be 10 to 30 points higher.
There can be language development delay both from hearing impairment and speech delay.
Gross motor skills like crawling and walking can be slow to mature and fine motor skills may take time to develop.

How do doctors diagnose Down syndrome?

Most often, Down syndrome is diagnosed while the fetus is still in the uterus (see tests below). Routine screening is recommended by the American College of Obstetrics and Gynecology in all pregnancies, regardless of the mother's age.

In the first and second trimesters of pregnancy, blood tests and ultrasound may be used to screen for not only Down syndrome, but also spina bifida and other genetic abnormalities. Should these screening tests show the potential for Down syndrome, specific diagnostic test may be considered. These include the following:

Amniocentesis: A needle is placed using ultrasound guidance into the uterus to obtain a sample of the amniotic fluid that surrounds the fetus. The fetus' chromosomes can be analyzed, looking for trisomy 21.
Chorionic villus sampling: Cells are taken from the placenta for fetal chromosome analysis.

There is a small risk of miscarriage with these tests. The decision as to which test might be best and when it should be done depends upon the situation and is made jointly with the mother and the health care professional.

At birth, Down syndrome is usually diagnosed by the appearance of the newborn and the health care professional will likely order a chromosome analysis to confirm the diagnosis.

What is the treatment for Down syndrome?

Providing support and treatment for a patient with Down syndrome is meant to improve their quality of life.
Infants with Down syndrome may experience developmental delays including time to sit, crawl, walk, and talk so parents need to know that developmental delays are common in children with Down syndrome. Using a team approach to care, physical therapists, occupational therapists, and speech therapists may help improve language, motor, and social skills to the maximum achievable by the individual person.
Medical conditions associated with Down syndrome, including those affecting the heart or the gastrointestinal system, may require evaluation and care, sometimes requiring surgery.
As the patient ages, the care and support needed will depend upon the intellectual ability and physical function achievable by the individual.

What are the potential complications of Down syndrome?

The extra genetic material can affect all organs in the body and complications may rise at birth or may present later in life.

Congenital heart disease may affect up to 50% of patients. Most commonly found are endocardial cushion defects (also known as atrial septal defects) and ventricular septal defects. Both are “holes” in the walls that connect the upper (atrium) and lower (ventricle) chambers of the heart.

There can be many abnormalities of the gastrointestinal tract, including duodenal atresia (failure for the first part of the small intestine to fully develop), imperforate anus, and Hirschsprung's disease where the nerves to the anus fail to develop appropriately. Gastroesophageal reflux is common and may lead to aspiration of stomach contents into the lungs leading to recurrent pneumonia. Celiac disease is common in Down syndrome.

Because of the abnormal facial anatomy, recurrent ear infections are common and can lead to deafness. As well, the large tongue and smallmouth are potential risk factors for developing sleep apnea.

Patients with Down syndrome have a higher risk to develop leukemia.

There is an increased risk for cervical spine instability, especially at the atlantoaxial junction, the joint that connects the first and second vertebrae in the neck. This can potentially be dangerous should there be subluxation or excessive movement that can damage the spinal cord. Most children will require a neck X-ray only if they will be participating in sports such as the Special Olympics. Scoliosis, hip dislocations, and knee laxity are other orthopedic issues that are prevalent.

What is the prognosis for someone with Down syndrome?

With increased understanding of potential underlying illnesses associated with Down syndrome and with increased support within the community for patient and family, quality of life for the patient has increased in recent years.

There is great variability in mental function between patients, but for those with the appropriate mental capacity, the ability to complete an education, live, and work independently.

Down syndrome patients tend to age more quickly and are prone to developing Alzheimer's disease, often as young as age 40.
Those patients who maintain their mental capacity tend to have a longer life span.
A poorer prognosis is found in those patients who develop dementia, lose their ability to perform daily physical activities, and those who have decreased vision.

What is the life expectancy for someone with Down syndrome?

Because of the many physical complications associated with chromosomal abnormalities, many fetuses with trisomy 21 fail to develop properly and are miscarried.

There is an increased risk of infant death in the first year of life because of congenital heart disease (failure of the heart to develop normally) and respiratory infections.

Given the challenges in the infant years, people with Down syndrome have experienced increased life expectancy as recognition and treatment of underlying medical conditions improve.

A person with Down syndrome can expect a life span of 50 years and more, depending upon the severity of underlying medical issues.

Is it possible to prevent Down syndrome?

Down syndrome is not an illness or disease to be prevented but instead, an unexplained error in replicating DNA, genes, and chromosomes at the earliest stages of embryo development.

Risk factors for Down Syndrome