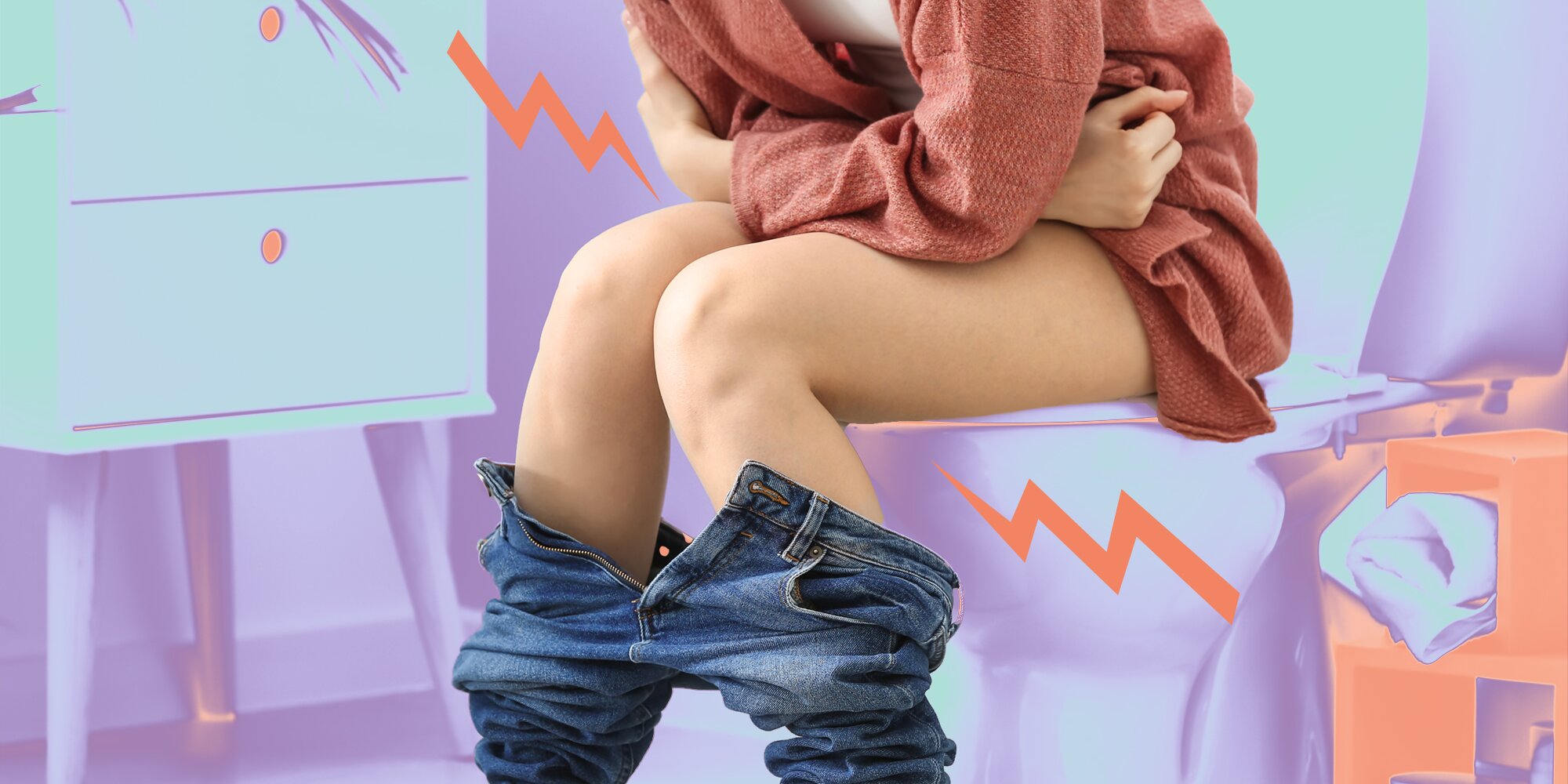 What Is Chronic Diarrhea? Here's When You Should See a Doctor

Nearly everyone has had a bout diarrhea-but what should you do when these bathroom trips happen on the regular?

Diarrhea is more than common-nearly every person has experienced it at one point or another. It's so common, in fact, that the US National Library of Medicine (MedlinePlus), says, on average, adults get the runs at least once a year. (Children typically get diarrhea twice a year.)

In general, infrequent bouts of loose, watery stool are nothing to worry about. Doctors call this occasional diarrhea "acute diarrhea"-which sounds scary but is actually a term for when diarrhea starts and resolves itself after a short period of time. Usually, people get acute diarrhea from a virus or bacteria, or, in less common situations, a parasite.

But sometimes diarrhea lasts longer than usual-this is a situation known as chronic diarrhea. "Chronic diarrhea is defined as diarrhea that lasts more than four weeks or comes and goes regularly over a long period of time, like 6 months," Christine Lee, MD, a gastroenterologist at Cleveland Clinic, tells Health.

When diarrhea lasts for an extended period of time like this, it can signal that something more serious is going on, and that a doctor should take a look to see how the issue can be treated. Here, gastroenterologists explain what the typical symptoms of chronic diarrhea usually look like, what can cause it, and what can be done about it so you don't have to spend the majority of your precious time on the toilet.

What are the symptoms of chronic diarrhea?

"Diarrhea for some is loose, explosive, urgent, frequent bowel movements," says Dr. Lee. But, for others, diarrhea might not be frequent or urgent, but simply characterized as loose bowel movements. Still others have more solid stool but consider it diarrhea because they have to go five or ten times a day, says Dr. Lee.

For the most part, diarrhea comes with a few other symptoms. According to MedlinePlus, the most common symptoms associated with any type of diarrhea, chronic or not, include:

However, because chronic diarrhea has many causes (more on that later), there are a host of secondary symptoms you might experience, ranging from abdominal cramps to eye problems (if you have Crohn's disease) or certain skin conditions (if you have Celiac's disease), according to Rabia De Latour, MD, a gastroenterologist at NYU Langone. A doctor will be able to test for internal symptoms as well, such as inflammatory markers in your GI tract (an indication of inflammatory bowel disease, or IBD).

Most often, however, it's the diarrhea itself that brings people to the doctor's office, Dr. De Latour tells Health. "Chronic diarrhea can be very bothersome for people, especially if it limits their ability to live life," she says. "People say things like, 'I can't go out to a restaurant' or 'I need to be by a bathroom all the time.' It can be somewhat debilitating."

Just like acute diarrhea can be caused by a handful of things, there are also many potential causes for chronic diarrhea, says Dr. Lee. To simplify, she breaks down the causes into six different categories:

IBD is one of the most common reasons people have chronic diarrhea, and it actually consists of more than just one disease. IBD is an umbrella term for any disease that causes chronic inflammation of the digestive tract, most commonly Crohn's disease and ulcerative colitis. IBD are forms of autoimmune disorders, meaning that your body's immune system attacks itself, Dr. Lee says. The resulting inflammation causes frequent diarrhea, and can also cause abdominal pain, unexplained weight loss, fatigue, and bloody stool.

IBS is another major cause of chronic diarrhea. Unlike IBD, IBS doesn't have a clear marker that doctors can test for. "With IBS your colon is mechanically normal and organically normal with no pathology. It's just very sensitive to certain triggers," says Dr. Lee. Because of this, IBS is diagnosed based on symptoms, including frequent diarrhea. You may also experience abdominal pain and bloating, or notice mucus in your stool.

Small bowel ischemia is a group of conditions that reduce blood flow to the small intestine, according to the American College of Gastroenterology. When the bowel doesn't get adequate blood flow, it can cause urgent diarrhea because it impairs the function of the colon, says Dr. Lee. Severe ischemia can turn into ischemic colitis which causes inflammation of the colon and can cause ulcers.

Unsurprisingly, food intolerances and sensitivities can cause chronic diarrhea. People who are lactose intolerant, for example, tend to get bouts of diarrhea after eating dairy while people who are fructose intolerant get diarrhea after eating fruits like watermelon or even raisins, says Dr. Lee. Although celiac disease is an autoimmune disorder, the symptoms can appear like a food intolerance-people with celiac disease react badly to gluten, so when they eat foods that contain wheat, they can get symptoms like bloating, abdominal pain, and chronic diarrhea.

How is chronic diarrhea treated?

Treatment for chronic diarrhea really depends on the underlying cause. Some treatments are relatively simple to figure out—if you have chronic diarrhea because of food intolerance or because you have celiac disease, you can "treat" the symptoms by avoiding the foods that trigger you, says Dr. De Latour.

Treatment for IBS also involves changing your diet. "It's really getting to know the patient and figuring out what their triggers are and avoiding those," says Dr. Lee. When you're diagnosed, your doctor will suggest an elimination diet, typically the FODMAP diet, to determine what triggers your symptoms. This means avoiding high FODMAP foods that tend to irritate the gut, like dairy, wheat, beans and lentils, certain vegetables like asparagus and onions, and some fruits like cherries and peaches, according to Johns Hopkins Medicine. Once you figure out what triggers you, avoiding those foods can help treat your symptoms. Your doctor might also suggest taking medication, like antimotility drugs to slow down the diarrhea, says Dr. De Latour.

If an infection is causing your chronic diarrhea, treatment usually involves treating whatever is infecting you, whether it means taking antibiotics to clear up a bacterial infection or medications that target parasites. Viral infections tend to clear up on their own, according to Dr. De Latour.

When the source of your diarrhea is IBD, your doctor will suggest "a barrage of different medicines and then evaluate your response," says Dr. De Latour. Those medicines can include anti-inflammatories as well as biologics that try to decrease the immune response to the disease. If IBD goes untreated (or doesn't respond to medication) for a long time, surgery might also be part of your treatment plan, to repair damage to your digestive system.

With iatrogenic diarrhea, the one caused by medications, you can work with your doctor to find a new medication that doesn't affect you or, if antibiotics are causing your diarrhea, taking a probiotic to replace some of the bacteria might help.

To treat ischemia, your doctor will likely suggest medications to manage the condition, especially if the loss of blood flow hasn't damaged your GI tract. Medications can include blood thinners to prevent clots and antibiotics to treat or prevent infections. If the ischemia is more severe, your doctor might suggest an angioplasty or stent to open narrowed blood vessels or surgery to restore blood flow, remove blockages, or repair damaged intestinal tissue.

Can you take over-the-counter medications for chronic diarrhea?

If you have a bout of acute diarrhea, you might reach for Pepto Bismol or Imodium-both can make short-term diarrhea more bearable. But these OTC medications shouldn't be your go-to for a lengthy period of time when dealing with chronic diarrhea, and if you have to take it for more than two to three weeks, it's time to consult your doctor. Note that, according to Dr. Lee, Pepto Bismol (bismuth subsalicylate) shouldn't be taken by those who are pregnant or allergic to aspirin.

These OTC medications also won't cure your chronic diarrhea-they'll just mask the issue. That's especially true for Imodium (aka loperamide), which merely slows diarrhea down. While it's great for bouts of acute diarrhea, it's potentially dangerous for chronic diarrhea, since it can back up your colon. "That may actually worsen whatever the problem is," says Dr. Lee.

Overall, if your diarrhea is chronic, the best way to treat it is to first figure out the root cause and treat that, rather than just treating the symptoms.

Again, the long-term effects of chronic diarrhea depend on the underlying cause. But, with all causes of diarrhea, dehydration is a big concern. When you have frequent diarrhea, you're losing water and electrolytes faster than usual, and it's important to replace them. Long-term, if dehydration goes untreated, it "can increase your risk of acute renal failure, electrolyte imbalance, and put you at risk for arrhythmias and possibly even blood clots," says Dr. Lee.

Hemorrhoids are another long-term complication of untreated chronic diarrhea, regardless of cause, says Dr. Lee.

Certain causes of chronic diarrhea like ischemia and inflammatory diseases can cause permanent damage to your bowel if untreated. "If it's severe enough and IBD, specifically ulcerative colitis, goes unchecked the person can become extremely sick and might have to have their entire colon removed," says Dr. De Latour.

Overall, anyone who has chronic diarrhea should check in with a doctor to figure out why, rather than ignoring it or trying to treat the symptoms alone. That's especially important if your chronic diarrhea is accompanied by "alarm symptoms," says Dr. De Latour. "If you notice unexplained weight loss or lightheadedness, you should really seek medical attention ASAP," she says. Per the CDC, other alarming symptoms that accompany diarrhea include: severe pain in your abdomen or rectum, a high fever (over 102 degrees Fahrenheit), stools containing blood or pus, or stools that are black and tarry.