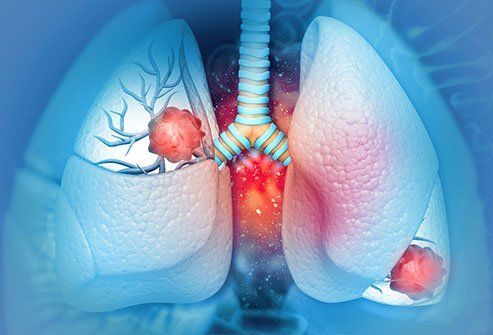 What Percentage of Smokers Get Lung Cancer?

According to the Centers for Disease Control and Prevention (CDC), lung cancer develops in around 10 to 20 percent of all smokers.

According to the Centers for Disease Control and Prevention (CDC), lung cancer develops in around 10 to 20 percent of all smokers.

Scientists believe that smoking is responsible for over 80 percent of lung cancers.
As per studies and researches, smokers who develop lung cancer may die relatively young if not treated appropriately. An estimated 23 percent of consistent heavy smokers never reach the age of 65.
Smoking is considered as the highest risk factor to cause lung cancer in 9 out of 10 people.
The possibilities of developing lung cancer depend on the frequency and duration of smoking.
The likelihood of getting lung cancer greatly increases after a few times smoking cigarettes due to the addictive nature of nicotine and the highly toxic chemical from cigarettes released into the lungs.
The percentage of developing lung cancer may also vary, as the patient grows old.

Why smoking is the biggest risk factor for lung cancer?

First, there are roughly 7,000 chemicals in tobacco smoke, and about 150 of them are cancer-causing agents. These substances influence the way lung cells grow and divide. Over time, it increases a smoker’s risk for cancer. This cell damage happens every time a person smokes or inhales passive smoke; therefore, even a small amount of cigarette smoke increases the risk.
Second, cigarette smoke inflames the lungs. At first, the lungs try to repair themselves, but over time, they cannot keep up with the damage. This ongoing injury to the cells leads to uncontrolled cancer growth over time.

What are the other possible risk factors for lung cancer?

Though cigarette smoking is the leading cause of lung cancer, there are other possible risk factors, which may include the following:

Exposure to secondhand smoke (passive smoking): This exposure especially affects the family members of smokers who have a higher risk of developing lung cancer.

Age: Increasing age is a risk factor for many cancers, including lung cancer. The average age in the United States for a lung cancer diagnosis is around 70 years. About 10% of lung cancer cases occur in people younger than 50 years old.

Exposure to unsafe chemicals at the workplace: Chemicals such as asbestos, coal gas, chromium, nickel, arsenic, vinyl chloride, and mustard gas may cause lung cancer. However, experts disagree on how much exposure to these carcinogens is dangerous.

Exposure to unsafe levels of radon gas: Radon gas is a radioactive gas produced from the natural breakdown of uranium in soil and rocks. It is present in the air we breathe.

Other lung diseases: People with a history of certain other diseases of the lung, such as tuberculosis (TB) and chronic obstructive pulmonary disease (COPD), are at increased risk of developing lung cancer.
Marijuana: Few studies and researches point out that there is a biological plausibility for the enhanced risk of lung cancer associated with marijuana.

What are the possible symptoms of lung cancer?

Severe cough that worsens over time and fails to go away
Blood in sputum
Severe chest pain
Hoarseness (change in the voice, which sounds breathy and rough)
Difficulty in breathing
Unexplained weight loss
Constant feeling of tiredness and weakness
Body and joint pain accompanied by headache

What are the treatment options for lung cancer?

The treatment depends on the lung cancer stages and other patient-related and disease-related factors. Some of the common treatment methods are:

Surgery: Surgery is for patients who are at an early stage. During the surgery, a portion of the infected lung or the entire lung is removed based on the severity of the infection.

Radiation therapy: With the help of powerful beams from X-ray and protons, cancer cells are killed. A combined treatment of radiation and chemotherapy is recommended for Stage III patients who are not candidates for surgery.

Chemotherapy: The treatment includes the use of drugs to eradicate cancer cells. These drugs are induced either orally or through veins in your arms.

Immunotherapy: A new tool in lung cancer treatment, drugs are given through the intravenous route. It makes way for the patient’s immune system to fight against cancer cells by clearing the proteins covering the immune system.